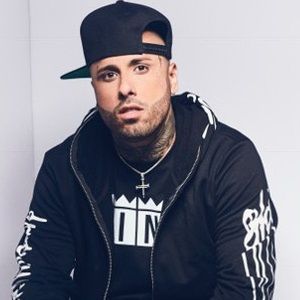 In Colombia is where I discovered myself as a writer.

The way I'm seeing it, God has given me all this for me to realize that this isn't what I really need in my life.

Nicky Jam has had a relationship with the beautiful artists like Jennifer Lopez and Shakira. But he fell for Angelica Cruz. He is married to the Colombian model, Angelica. The 36-year-old singer met her online. The couple tied the knot in a private ceremony in Medellin Colombia on 2017, February 3. Even if it was a private wedding ceremony, the guests shared the pictures of their wedding via their social media handle. They are blessed with two children: Yarimar Rivera and Alyssa Rivera.

Who is Nicky Jam?

Nick Rivera is an American singer and songwriter. He is known by his nickname Nicky Jam. He has been popular since his hits such as “Travesuras”, “Te Busco”, “El Perdón”, “Hasta el Amanecer”, and “El Amante”.

Rivera was born on March 17, 1981, in Boston, Massachusetts, U.S. He is now 37 yrs old. He has been in reggaeton since his youth. He got his name “Nicky Jam” jokingly as given to Rivera by a homeless man. Rivera’s family was economically low and in minor, he performed illegal work in a grocery store in order to help.

One day, a music executive was in the grocery when he noticed Nicky and his talent and he signed him at the age of fourteen.  He recorded his first album, Distinto A Los Demás. The album didn’t gets it the success, but it was Nicky’s golden opportunity that builds him recognition in the music industry and secured the attention and love of some music producers such as DJ Joe, DJ Playero, and DJ Chiklin.

The name of the high school or the University Nicky has attended is unknown. There are also no details about his’s education.

He started  to work in the music industry when he completes his first album.  He then met Daddy Yankee who was recording with Guatauba and DJ Playero. He has also get mixed with different famous artists like Daddy Yankee and Enrique after that. Between the 199o they became friends and planned to work together. They formed the unofficial Daddy Yankee and Nicky Jam duo, also known as Los Cangris. They worked together and created many commercially successful singles which were loved by all. It includes “Sabanas Blancas”, “Guayando”, “Sentirte” and many others.  It is said that they have also worked together on the album named “Los Super Amigos” in 2000 but was never released.

Due to personal issues, they ended their friendship in 2004 and stopped working together.  So Nicky planned to work single and continued working as a solo artist and created many commercially successful singles and they were loved by his fans. In 2012, they said they were together again sorting out all of their disagreements they both recorded “El Party Me Llama” from the album Prestige. He then also make his different singles that were loved by everyone. Performing on concerts in 2010, he released successful singles “Tu Primera Vez”, “Piensas en Mi”, “Curiosidad”, “Juegos Prohibidos”, “Voy A Beber” and so on.

He has also worked in various movie and done discography.

Nicky Jam: Salary and Net Worth

Nicky Jam net worth is estimated to be $500k. Furthermore, he has earned now much sum through his career as a singer and a songwriter.

In 2015, Nicky’s rumors were circulated that the singer was addicted to drugs. There were also rumors spread about his and Daddy Yankezz relationship when there was the conflict and between the two. But Nicky cleared the rumors and the misunderstanding between them was also cleared developing a more friendly relationship.

Nicky weighs 80 kg and 6 feet in height. He has dark brown colored Hair and has Black colored hair.