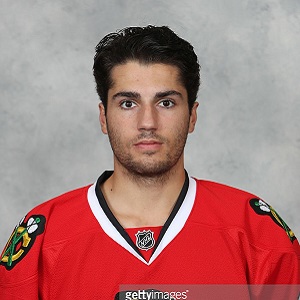 Nick Schmaltz has kept his personal life private and out of the spotlight. He usually doesn’t talk about his private life in media and public. He prefers people focusing on his work rather than his personal life. He hasn’t mentioned about his affairs publically and has managed to keep it low profile. There is no any record of his marriage and divorce till now.

Who is Nick Schmaltz?

Nick Schmaltz is an American professional ice hockey player. He currently plays as a forward for the Chicago Blackhawks of the National Hockey League (NHL). He was selected by the Blackhawks in the first round, 20th overall of the 2014 NHL Entry Draft.

Nick was born on February 23, 1996, in Madison, Wisconsin, USA.  He grew up in Verona, Wisconsin. He is the son of Native American parents Lisa Schmaltz and Mike Schmaltz. He has an elder brother, Jordan Schmaltz and a younger sister Kylie.

Nick began playing hockey as a professional while he was at the University of North Dakota. He was ranked 19th by the NHL Central Scouting Bureau on their final list of the top draft-eligible North American skaters leading into the 2014 NHL Entry Draft.

He played junior hockey with the Green Bay Gamblers of the United States Hockey League (USHL) from 2012 to 2014. At the time of his first season, he was named to the 2012–13 USHL All-Rookie Team. Schmaltz played a season with the North Dakota Fighting Hawks and won the 2016 NCAA National Hockey Championship as a sophomore.

He ended his collegiate career and turned professional after signing a three-year entry-level contract with the Chicago Blackhawks on June 19, 2016. He scored his first NHL goal on October 15 against Marek Mazanec of the Nashville Predators.

Nick with the United States men’s national ice hockey team at the 2013 World Junior A Challenge. At the tournament, was named the tournament’s most valuable player as he led Team USA to capture the gold medal. His annual salary is $832,500. His net worth is unknown.

He has a height of 6 feet with body weight 80 kg. He has dark brown hair color and his eye color is dark brown.