Nick Swardson is a stand-up comedian, actor, screenwriter, and producer. He is currently single. 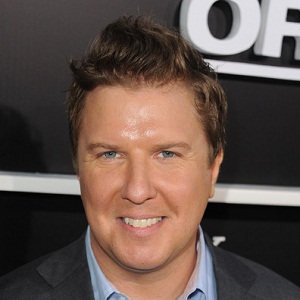 I always thought that the fastest way for me to get ahead and get noticed and to do well was to make my act very accessible. When I first started, I talked about family stuff, my dog, my cat. It was all I knew back then

I wasn't forcing anything, but I wasn't like, 'Hey, don't you hate doing homework?' Read more at

Improv kind of goes hand in hand with what I do. I was on 'Reno 911!' for six years, and that was a completely improvised show. Read more at

For me, honestly, one of the first movies I did I was always pounding coffee, and I crashed so horribly. So I've kind of weaned myself off. You keep getting second and third winds. But for me, I've stopped doing energy drinks or any kind of stimulant. I just kind of go natural. Read more at

What is the relationship of Nick Swardson?

Nick Swardson is currently single.  Even if he is dating or has a wife/girlfriend, there is no information about his romantic life out in the public and media.

Talking about his previous affair, he has not revealed his personal life and love interest.

Who is Nick Swardson?

Nick Swardson is a stand-up comedian, actor, screenwriter, and producer. He is famous for his role as Terry Bernadino in the comedy series called Reno 911! along with the actor Adam Sandler.

He was born Nicholas Swardson in Minneapolis, Minnesota, USA, on October 9, 1976. He is of mixed(Swedish, Scottish, Norwegian, and German) ancestry.

His father’s name is Roger Eric Swardson and his mother’s name is Pamela Swardson. His dad Mr. Roger was a journalist and investor.

Talking about siblings, he has a sister Rachel Swardson and a brother John Swardson.

He was very playful when he was a child.

Nick had attended St. Paul Central High School where he began acting and doing improv comic drama when he was 16. He was removed from secondary school four times for his naughty behavior.

Then he started going to open mic evenings and doing stand-up at 18. He won the Acme Comedy Co’s. honor for “Most Interesting Person in the Twin Cities.”

Nick started as a stand-up comedian.

For fostering Nick’s career in acting, he migrated from Minnesota to New York and then went to Los Angeles.

He then got jobs in commercials at the start, gradually he got the roles in TV and movies.

In 2000, he debuted in the comedy-drama movie Almost Famous. Then the next year he appeared on a show in Comedy Central Presents.

In 2010 he had his own show Nick Swardson’s Pretend Time on Comedy Central. The show went on for two seasons.

He performed at the U.S. Satire Arts Festival in 2007.

He was also featured in Bucky Larson that is Born to Be a Star, and 30 Minutes or Less. His Comedy Central sketch show, Nick Swardson’s Pretend Time, ran for two seasons from 2010 and 2012.

He has a net worth of $5 million as of 2022. His salary is unknown through the sources.

There is no rumor or updated information relating to Nick Swardson’s affair.

In the past, he might have a girlfriend but currently, he is not dating anyone. He is enthusiastic about his career.

Nick impresses his fans due to his awesome performance in the acting, he is the fresh face in the comedy he loves his acting.

He has a height of 5 feet and 8 inches and weighs 80 kg. He has red hair color with green eye color.

You may like to read the bios of Irv Gotti, Jill Talley, Tamera Mowry