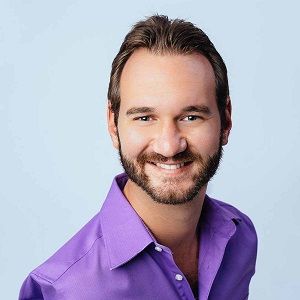 The 35-year-old motivational speaker, Nick is a married man. He tied the knot with his girlfriend, Kanae Miyahara after dating her for a couple of months. Nick and Kanae exchanged their vow on 12 February 2012. Together, they have also welcomed four children Dejan Levi Vujicic, Kiyoshi James Vujicic, Olivia Mei Vujicic, and Ellie Laurel Vujicic.

The couple first met him in Texas when she came to hear his motivational video. Since their marriage, the lovely pair has maintained a perfect relationship with them. Apart from his wife, there is not even a single affair of him. Currently, Nick and Kanae are enjoying their married life and living elegantly.

Who is Nick Vujicic?

Nick Vujicic is a motivational speaker as well as an evangelist. He was born with a rare disorder, tetra-amelia syndrome which is the absence of arms and legs.

He has formed an international non-profit organization Life Without Limbs as well as a secular motivational speaking company named Attitude is Altitude.

Furthermore, he has also appeared as the role of Will in the short film The Butterfly Circus for which he has also won Best Actor in a Short Film. Additionally, he has also published several books such as Life Without Limits: Inspiration of a Ridiculously Good Life, Unstoppable: The Incredible Power of Faith in Action, Stand Strong, and few more.

Nick was born on December 4, 1982, in Melbourne, Australia. He is the son of Dušanka Vijicic and Borislav Vujičić. Talking about his nationality, he is Serbian-Australian and his ethnicity is unknown.

As a child, his childhood was not easy at all as he was regularly bullied during his school days. Growing up without hands and legs, he didn’t want to survive and even tried to suicide several times.

Concerning in his education, Nick completed his graduation from Griffith University with a Bachelor of Commerce degree. Later, he earned his double major degree in accountancy and financial planning.

Nick began his motivational speaking career from his college days. As a speaker, he has been giving the speech to school children, young adults, and working professionals.

So far, he has also travelled more than 70 countries. Later in 2005, he established an NGO called Life Without Limbs. During the same year, he also launched a documentary movie named Life’s Greater Purpose. In addition, Nick has also appeared in a short film titled for which he also won a couple of awards.

Additionally, he has also published several books such as Life Without Limits: Inspiration of a Ridiculously Good Life, Unstoppable: The Incredible Power of Faith in Action, Stand Strong, and few more. Moreover, the motivational speaker also established a secular motivational speaking company named Attitude is Altitude. So far, he has motivated a lot of people around the world.

Being a motivational speaker, he earns a decent amount of money from his profession. Currently, he has a net worth of $500 thousand.

As of now, Nick has won a couple of awards in his career which includes Best Actor in a Short Film for the short film The Butterfly Circus. Back in 1990, he also received the Australian Young Citizen Award.

Moving towards his body measurement, he has a pair of gorgeous blue eyes and brown hair. Apart from that, there is not any information regarding his height, weight, and other body measurements.