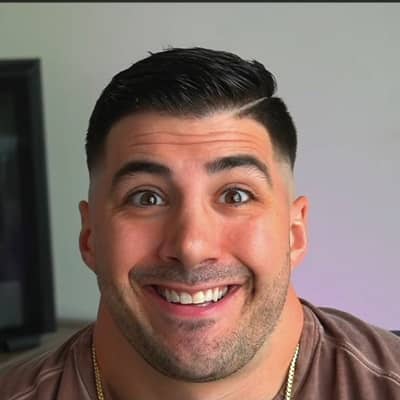 NickMercs is married to his longtime girlfriend Emumita Bonita. They dated for some years and kept marry proposal to Bonita on July 8, 2019. Eventually, they shared the marital vows on October 10, 2020. They don’t have children. Nickmercs often shares a picture of his wife on his Instagram account. He is very concerned about his relationship and loves his wife.

NickMercs is an American Twitch streamer, Youtuber, Social Media Star, and Gamer. He is famous as a member of FaZe Clan and an ex-member of a gaming group, 100 Thieves. Likewise, he is an accomplished Youtuber with over 3.9M subscribers.

In addition, he once had the world record for most kills in a Fortnite Game with 55 kills.

Nickmercs was born on November 21, 1990, in Michigan, USA. As of 2020, he celebrated his 30th birthday. His real name is Nick Kolcheff. He is Native American and currently resides in Detroit, Michigan.

Likewise, his father’s name is Kevin Kolcheff, a high school football coach. However, he hasn’t revealed any details regarding his mother and siblings. Once, he posted the picture of him and his mother on Twitter wishing her a mother’s day wish. He has two younger siblings.

Similarly, his nationality is American and his Ethnicity is Native American. His birth sign is Scorpio.

Speaking about his education, NickMercs joined City High-Middle School in Grand Rapids for his schooling. Later, He finished his graduation from the University of Michigan. During his college years, NickMercs won a free-throw basketball competition representing Michigan.

Nickmercs is mainly a Youtube content creator and Twitch Streamer. He is famous as a member of FaZe Clan which was created by Thomas Oliveira. He is also an ex-member of a gaming group, 100 Thieves. His channel is famous for its content of Gaming, Vlogs, and challenge videos. Nickmercs is also popular for his aggressive gaming style. He posted his first video in 2011 which gained huge feedback in a short amount of time. He continued to upload more videos day by day.

By early 2016, this channel had over 700K subscribers. He became a success to add more subscribers to his youtube channel day by day. He is mostly popular for his gaming videos. Now, he is already a youtube personality with over 3.9M loyal subscribers on his ‘NICKMERCS’ channel.

His overall videos have succeeded to attract attention from around 596 million people. Similarly, he is also praised for his legendary commentaries on Youtube. His videos have gained outstanding publicity.

Moreover, Nickmercs created another Youtube channel “More NICKMERCS” on July 17, 2020. However, he is more popular for his old account. As of June 2021, He has uploaded several videos of Games, Vlogs, and Challenges. Some of the popular videos include ‘HIS MOM GOT ON THE MIC! (Fortnite Battle Royale)’, ‘NEW WORLD RECORD 55 KILL WIN! (Fortnite Battle Royale)’, and ‘My Random Duo was A HACKER! 😨 (Modern Warfare Warzone)’.Up until now, he has around 3.9M subscribers and 596,587,380 views on his personal youtube channel.

In addition, he once had the world record for most kills in a Fortnite Game with 55 kills. However, his record was later broken by gamers like xPolitics, MannyinCali, TozSlays, and JuicyMutt with 59 kills. Talking about his awards and accolades, he is the winner of the top Live Streamer award at the 2020 Streamy Awards. He also won the first Fortnite Friday along with SypherPK.

Speaking on his income, he makes a decent sum of money through his successful youtube career, twitch streaming, and social media presence. In 2019, he was one of the 10th highest-earning gamers. He has an estimated net worth of around $4M.

His earnings are influenced by his youtube channel. Likewise, he earns an extra amount of money from ad revenue, merchandise sales, and sponsorship.

Nickmercs has a height of 5.11 feet. He weighs approximately 80 kg. similarly, his eyes are of dark brown color, and his hair is brown. He is a bodybuilder and has a fit body and maintains his body with a strict diet and workout routines.

Matthew is active on social media. He has over 1.9M followers on Twitter, more than 2.5M followers on Instagram, and around 51K followers on Facebook. Likewise, he is a twitch star with over 5.8M subscribers. Moreover, he has around 622.4K followers and 3.1M overall likes on the Tiktok account.

Click the provided link for more information about Blarg (Gamer), SallyGreenGamer, and EthanGamer !!