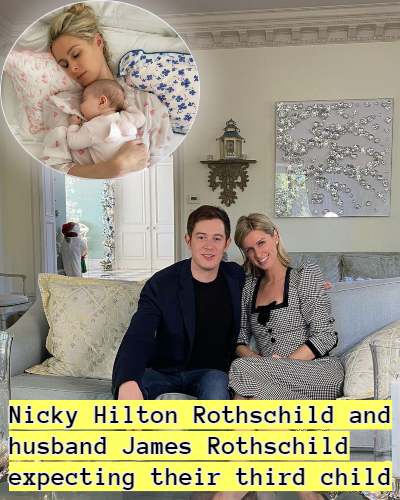 The fashion designer, Nicky Hilton Rothschild is going to be the mother of three.

Also, Nicky had a baby shower in May 2022 and revealed the gender of the baby. The couple is having a baby boy.

She shared a picture pose in front of a floral wall while cradling her stomach with beautiful captions.

“They say the best things in life come in threes.”

Hilton Rothschild is married to a financier James Rothschild in the summer of 2015. Their wedding was a fairy tale that was held at Kensington Palace Orangery which was built back in 1704. They walked down the aisle on July 10, 2015, in a lavish London ceremony.

According to the source, the couple will welcome their third child during the summer of 2022. The sex of the baby is also yet to be revealed.

Also read “Here Is A Quick Insight To The Married Life Of James Rothschild And Nicky Hilton With Their Children!”

After Nicky announced her pregnancy news, her Instagram comment section was overwhelmed with congratulation from her well-wisher.

Paris Hilton, Nicky’s elder sister also took to Instagram to share her happiness about becoming an aunt for the third time. She shared an adorable throwback capture of Paris holding baby Nicky and captioned,

“I’m so so happy for my sister [Nicky] and her husband James on the announcement of their third child on the way!,”

She continued, “You are the best mom and I love being an aunt to your two beautiful angels, and can’t wait to meet your new baby! Love you all so much!”.

Hilton and Rothschild are already parents to two beautiful daughters Lily Grace Victoria, 5, and Theodora Marilyn, 4. The newborn baby will be the third child of the couple.

In February 2020, Hilton discuss her parenting experience to PEOPLE that the biggest lesson that she has learned from parenting two daughters is patience.

“Patience and being the best version of yourself”,

“I think all moms suffer from mom guilt. I think we could all do better at that and it’s important to still do the things you love. Don’t let your children completely take over your life. Navigate that balance and find that balance.”

Also read “Checkout the sisters of these Hollywood celebrities”