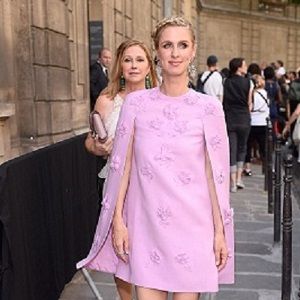 "My fashion philosophy is that if I like it, I wear it. I'm not a snob about which looks are 'this season' and which are 'last season.'

Paris is my sister, and Nicole's like a sister to me. They'll be friends again.

Who is Nicky Hilton Rothschild married to?

Nicky Hilton Rothschild is married to James Rothschild. James is a banker who has a long history in the banking industry from his ancestors.

The rich and the elegant couple shared the marital vows on July 10, 2015. The ceremony took place at The Orangery in Kensington Palace Gardens in London. The main attraction of the event was the A-list celebrities wearing lavish clothes and jewelry.

They started dating in 2011. Together, they have two children. They are Teddy Rothschild and Lily Grace Victoria Rothschild.

Teddy was born on December 20, 2017, and Lily was born on July 8, 2016.  Before this, she was in several other relationships and a divorced marriage.

She dated Film/TV producer, David Katzenberg from 2006 to 2011. It was almost five years of the relationship. But at last, it ended sadly.

Before this, she was in an affair with the actor, Kevin Connolly from 2004 to 2006.  Similarly, she was in a short-lived marriage with Todd Meister.

Who is Nicky Hilton Rothschild?

New York-born Nicky Hilton Rothschild is a renowned personality. She is an American citizen. Nicky is a model and a businesswoman.

Moreover, she is also a socialite and a fashion designer. Mainly, she is famous as heir of the Hilton Family and her association with the Rothschild family after her marriage to James Rothschild. She is active since 1992.

Nicky Hilton Rothschild was born as Nicholai Olivia Hilton on October 5, 1983. She was born in New York City in New York.

Being born into a rich Hilton family, she enjoyed all the perks of it. Her mother’s name is Kathy Hilton. Similarly, the name of her father is Richard Hilton. Kathy worked as an actress. And Richard is a real estate businessman.

She has a mixed ethnic background. It is a mixture of Norwegian, German, Italian, English, Irish, and Scottish descent. Her sister Paris Hilton is a popular singer/actress/DJ/socialite.

For her education, she studied at the Convent of the Sacred Heart. She completed her education there in 2001. Afterward, to pursue her fashion career, she enrolled at the Fashion Institute of Technology. Later, she also learned about fashion at “Parsons The New School for Design.”

Nicky Hilton Rothschild began as a fashion designer in 2004. She launched her own clothing line in 2004. Afterward, she also worked for Samantha Thavasa. She helped them to design their handbags.

The next year in 2005, she modeled for Antz Pantz. It is a famous underwear line. During those times, she also appeared on the cover of a magazine, Lucire. Then in 2007, she launched an even more expensive clothing line named, Nicholia.

Furthermore, she is also a businesswoman. She opened two hotels in partnership. Later, the partnership did not end well with both sides filing a case against each other on several occasions.

Nicky is also an author. She wrote a book, “365 Style” in 2014. Similarly, as a socialite, she helped several non-profit organizations. Some of them are the Make-a-Wish Foundation, Starlight Children’s Foundation, and others.

Previously, in 2017, she launched cosmetic products in collaboration with Smashbox.

Presently, her salary and net worth are not available. But she is believed to have millions of dollars as her net worth as of 2022.

Nicky Hilton Rothschild is a popular name in the whole world. Previously, she was into controversy for breaching a contract with a then-hotel business partner.

But she likes to keep her image off the criticism and media tittle-tattle. Consequently, she is not part of any significant controversies or rumors as of now.

Nicky Hilton Rothschild is a gorgeous woman. She has a height of 5 feet 7 inches. While Nicky has blue eyes, her hair color is blonde. Similarly, she weighs around 55 kg. Her slim body measures around 34-24-34 inches.

Also get to know more about the birth facts, education, career, net worth, rumors, height, and social media of different personalities like Emily Sandberg, Kalani Miller, and Vanessa Laine Bryant.