Nicky Whelan is an Australian actress and model. 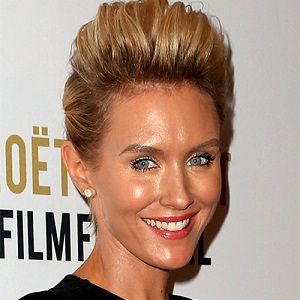 I am a very deep person. I run very deep in real life

It's such a process to get a show off the ground initially. And then, to already have a second season announced is a dream come true for any actor.

The beautiful actress Nicky Whelan married to the beautiful popular American actor and football player Kerry Rhodes. The couple dated each other for several years before their marriage. After years of their affair, the couple got engaged in the year 2016. Rhodes and Whelan got married on April 15, 2017.

Their marriage ceremony was held in Los Angeles. They divorced the same year in November. Before getting married to Kerry, Nicky has been in relationships with the American actor David Spade and the British actor Gary Stretch in 2008.  She dated the popular American musician DJ Ashba for over a year from 2010 to 2011. She was in a relationship with the handsome American actor in 2012 and 2013.

Who is Nicky Whelan?

Nicky Whelan is an Australian actress and model. She is best known for her role as Pepper Steiger in the Australian soap opera Neighbours (2006-2007). She is also famous for her role as Maya in the American medical comedy-drama television series Scrubs (2009-2010).

Nicky Whelan was born on 10 May 1981, in Victoria, Australia. She is the granddaughter of Marcus Whelan, who played in the Australian Football League in the 1930s and ’40s. There is no any information about her parents. She has not revealed any information about her childhood life. Her educational background has not been disclosed yet. Her nationality is Australian and she is of English ethnicity.

Nicky has been an active member in the film industry since 2003. Her first acting role came up in the 2003 TV movie Pizza.

In 2004, she played a small role as Chrissie Grant in the film Russell Coight’s Celebrity Challenge. At that time, she hosted a number of shows, including Coxy’s Big Break, Beyond the Boundary, and Melbourne Woman. She has also posed for a number of Australian magazines, including FHM, Ralph, and Inside Sport.

In 2006, she was cast for the role of Pepper Steiger in the Australian soap opera Neighbours. She portrayed the role until 2007. Her recent film appearance includes a guest role in the film From Dusk till Dawn: The Series (2016).

Nicky Whelan: Salary and Net Worth

Throughout her successful acting career, she has accumulated a net worth of 4.3 million dollars but her salary is not revealed yet.

Nicky Whelan has the height of 5 feet 4 inches. Her body weighs 54kg. Besides these, she has blonde hair and blue eyes. As regards to her body measurement, her bra size measures the size of 32B. Her waist size is 23.5 inches, breast size is 34 inches and hip size is 35 inches. Her physical appearances show that her shoe size is 7.5 US and dress size is 4 US.