Queen Of The Ring is an Olympic Gold Medalist in boxing hailing from the UK. She is currently in a relationship.

Nicola Adams’ current relationship status is in a relationship. She is dating Ella Baig since May 27, 2018. Ella is a beauty blogger.

Nicola and Ella holidays in Thailand and Australia.

Previously, Nicola was in a relationship with American boxer, Marlen Esparza. They were even engaged for 16 months but in 2018, the pair parted away. 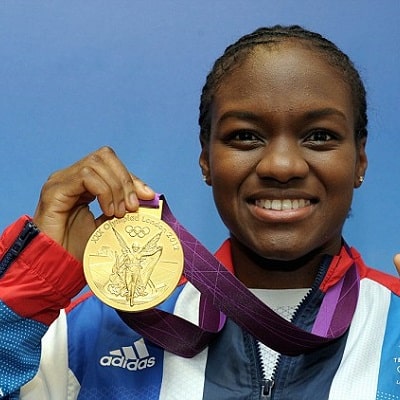 [One] label that has been attached to me is “bisexual”, although I would rather be just a person and not be categorised.” “I think I've coped all right with the attention. I'm still the same person I always was but now a lot more people know me.

I got my inspiration when I sat down with my father, at about eight or nine years old, and watched 'The Rumble in the Jungle.'

I only went into a gym by accident. My mum couldn't get a babysitter and wanted to do aerobics, so she took me and Kurtis, my younger brother, down to the gym. There was an after-school boxing class on with some of the kids from school. There weren't any other girls there, but I didn't mind. I loved it.

Who is Nicola Adams?

Nicola Adams famous as Queen Of The Ring is an Olympic Gold Medalist in boxing hailing from the UK.

Also, she has appeared in numerous movies and TV series like Commonwealth Games, Waterloo Road, etc.

In 2012, she was named the most influential LGBTQ+ person in Britain for her help and support to the LGBT community.

She was born Nicola Virginia Adams on 26th October 1982 in Leeds, Yorkshire, UK. She was born to her Innocent Adams and Denver Adams.

Her father is a plasterer and her mother is a hairdresser as well as a restaurant manager.

She also has a younger brother, Kurtis Adams.

When Nicola was at the age of 11, her parents separated.

Her mother, Denver, suffered from contracted meningitis however, Nicola quickly called an ambulance and saved her mother’s life.

At the age of 13, Nicola Adams fought her first fight.

In 2001, she became the first-ever woman boxer ever to represent her country in England team camp.

In 2003, she became an English amateur champion for the first time and retained the title at the next three championships.

She became the first-ever female boxer to defend her Olympic title in the 2016 Rio Olympic games, having won her first gold title at the 2012 London Olympics.

Adams knocked out Michaela Walsh of Northern Ireland at the 2014 Commonwealth Games in Glasgow and won the gold medal in the women’s flyweight division on a split decision.

She signed with promoter Frank Warren on January 23, 2017, and made professional debut with a 40-36 points victory over Virginia Carcamo of Argentina.

Finally, she announced her retirement from professional boxing, in November 2019, as an undefeated champion.

She was awarded the MBE and OBE in the 2013 & 2017 Queen’s New Years Honours List for her services to boxing.

In July 2015, the University of Leeds awarded an honorary Doctor of Laws degree to her.

In addition, she was nominated for BBC Sports Personality of the Year in 2012.

Nicola is a dark-eyed brunette. Her height is 5 ft. 5 inches and weighs 51 kg.