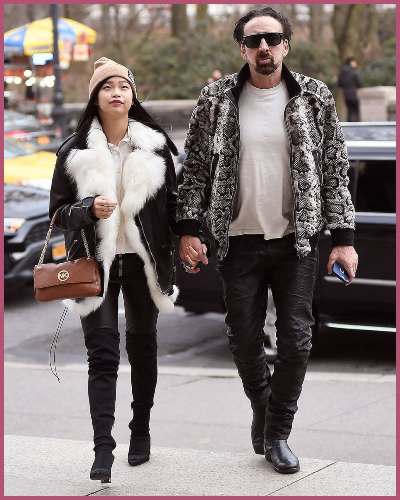 The Oscar winner Nicolas Cage is expanding his family member with his wife Riko Shibata.

In January, the couple has been public about having a child together but now they revealed the sex and name of the unborn child. Their representatives told PEOPLE,

“The Parents-to-be are elated!”

After that, Cage himself confirmed the news in an email to TODAY writing,

On 26 April, Cage announced the sex and name of the unborn child during a Thursday appearance on The Kelly Clarkson Show while seeming to promote his upcoming new film, The Unbearable Weight of Massive Talent.

Prior to his announcement, he recalled his childhood memories explaining that his brother introduced him to his “favorite song ever written,” Across the Universe by The Beatles. He then continued,

Well, congrats to the couple on their upcoming new journey as a parent. Regardless, the 58-years old actor is already a father of two sons Kal-El, 16 from a previous relationship with ex-wife Alice Kim and Weston, 31, with actress Christina Fulton.

On the other hand, this will be the first baby for Cage’s wife Riko.

What is the name of the unborn baby girl?

Appearing on a US chat show, Cage also revealed the unborn baby girl’s name i.e., Lennon Augie. The couple has chosen their unborn baby’s name in tribute to Beatles musician John Lennon and his late father, August Coppola, who died in 2009.

“Her name, because of Across The Universe (the song by The Beatles), is going to be Lennon Augie, Augie after my father, and I’ll call her Lenny for short.”

“I’m thrilled. It’s gonna be the biggest adventure of my life, so, here we go.”

Similarly, the two had already chosen a name for a baby boy if the baby ended up being a boy i.e., Akira Francesco. They chose names after Cage’s uncle, Francis Ford Coppola, an Academy Award-winning director, who decided to change his name to Francesco

Likewise, he starred in a variety of films such as Valley Girl, Racing with the Moon, Birdy, Peggy Sue Git Married, Raising Arizona, Moonstruck, and Red Rock West. See more…