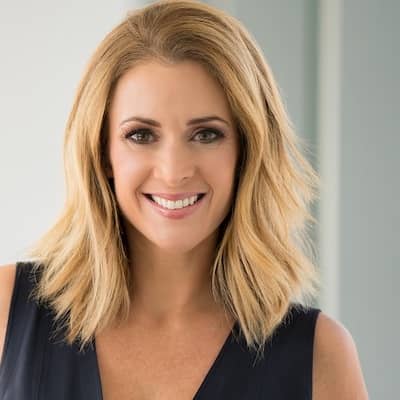 Nicole Briscoe is currently married to a race car driver. She exchanged vows with Ryan Briscoe on 21 Dec 2009. Her husband became a US citizen in 2018.

The wedding took place in Hawaii and it was attended by their family and friends. This couple welcomed their first child, a daughter in 2013 and named her Finley.

Then after a year, they were again blessed with their second kid, Blake James Briscoe. Nicole loves her family and often posts their lovely moments on her social account.

On 04 April 2021, she uploaded a picture where she, her spouse, and children were holding each other and they wished a Happy Easter to everyone.

Who is Nicole Briscoe?

Nicole Briscoe is an American sportscaster. The public noticed her for hosting the show NASCAR Now on the ESPN2 network.

Moreover, she is also a semi-finalist of Miss Teen USA 1998.

She was born as Nicole Manske on 02 July 1980 in Wausau, Wisconsin, United States. The name of her mother and her father is behind the curtain.

Nicole’s ancestry is Caucasian and talking about her academics, she attended Hononegah High School and Northern Illinois University.

Nicole Briscoe at present is an employee of the ESPN network which she joined in 2008. She has covered various NASCAR shows. From 2015, she hosts a daily sports news program, SportsCenter.

Her other experiences are,

Nicole at first participated in the Miss Illinois Teen USA 1998 and won. She after this went for Miss Teen USA in August 1998 but did not win. However, she was one of the semi-finalists in that pagent.

Then she was seen competing in Miss Illinois USA 2001 and was placed as first runner-up. The title was won by Rebecca Ambrosi.

At present, she collected an estimated net worth of around $1 million. However, her salary and other earnings are unknown.

This Sportscaster is keeping herself away from rumors and is also not surrounded by any desperate scandals.

But recently, in April 2021, she opened about her fertility problems and shared her miscarriage experiences at National Infertility Awareness Week.

Her both daughter were born with the help of in vitro fertilization procedure. She said that she suffered from extreme endometriosis and lived for 10 years of infertility. She also added of having countless miscarriages and terrible periods.

Regarding Nicole Briscoe’s body features, her height is 5 ft 7 inches and her body weight is 63 kg.

Moreover, her eyes are green, her natural hair color is Auburn, and has a fair skin complexion.