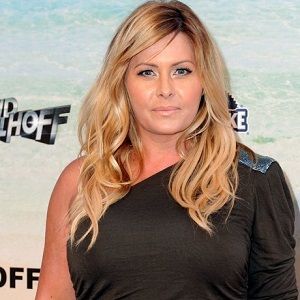 When short guys start working out to bulk up. I like muscles, but I don't like really buff guys:For all the concern about bodies and weight, 'Baywatch' has three huge catering trucks on the set at all times. One for entrees, one appetizers and one for junk food:One guy wanted an outline of my foot. Another guy wanted locks of my hair.

What is the relationship of Nicole Eggert?

The 46-years-old American actress, Nicole was previously married to Justin Herwick. The couple began dating in 1996 and finally tied their knot in in 2000. Together, they also welcomed a daughter named Dilyn in 1998. However, they couldn’t continue their relationship for so long and divorced in 2002. In July 2011, she gave birth to her second daughter, Keegan.

Prior to her marriage, she was in several relationships. Back in 1991, she has dated Corey Haim and continued their relationship for a couple of years before separating. Back in 1993, Nicole was linked up with Eric Etebari and they also split up soon. Additionally, her name was also linked up with a couple of actors such as Jeremy Jackson, Aaron Paul, and Mark Wahlberg. Currently, she is enjoying her single life with her daughters and living elegantly.

Who is Nicole Eggert?

Nicole Eggert is an American actress. She rose to prominence after appearing in the 1987 hit TV series Charles in Charge. Later, she again came into the spotlight after starring Summer Quinn in the famous Baywatch series.

Besides this, she has also featured in a couple of popular TV shows such as Celebrity Fit Club and Splash. In addition, she has also won Young Artist Award in the category of Exceptional Performance by a Young Actress in a Television Comedy Series for Charles in Charge.

Nicole was born on January 13, 1972, in Glendale, California, United States. She is the daughter of Gina Eggert and Rolf Eggert. Talking about her nationality, she is American and her ethnicity is German-English.

From the beginning of her childhood, she had a keen interest in acting and also appeared in commercials at a very early age. Moreover, she has also won Miss Universe in the petite division at the age of five. Concerning in her education, there is not any information regarding her educational background.

Nicole began her acting career at the early age of eight when she played a role in the movie Rich and Famous. During her teenage, she had done several films and television series such as The Clan of the Cave Bear, The Haunting of Morella, Fantasy Island, Who’s the Boss?, Annihilator, and few others.

Later in 1987, she landed the role of Jamie Powell in the huge hit TV series Charles in Charge in which she appeared from 1987 to 1990. Soon after that, Nicole also starred in The Super Mario Bros. Super Show! and Secrets.

Additionally, she gained huge recognition from her role as Summer Quinn in the famous Baywatch series along with Pamela Anderson. Furthermore, the veteran actress has also appeared on the cover of the debut album Lemonade and Brownies of rock band Sugar Ray. Besides this, Nicole has also featured in a couple of popular TV shows such as Celebrity Fit Club and Splash.

Moreover, some of her films are Dead Lenny, Blown Away, Anything for Love, The Haunting of Morella, and much more.

Being a famous actress, she earns a healthy amount of money from her profession. Currently, she has a net worth of $500 thousand.

As of now, Nicole has won Young Artist Award in the category of Exceptional Performance by a Young Actress in a Television Comedy Series for Charles in Charge.

Once, Nicole came in the headline after she claimed that she was sexually molested by Scott Baio. The Baywatch actress also revealed that she was just 14-years-old when Scott harassed her.

Besides this, there are no rumors regarding her personal and professional life.

How tall is Nicole Eggert?

Nicole has a height of 5 ft 3 inches and her weight is unknown. Furthermore, she has a pair of gorgeous blue eyes and blonde hair. Besides this, there is not any information regarding her other body measurements.