Nicole Glor is an American fitness expert and author. She is married to an Emmy-award winner Journalist, Jeff Glor, and is the mother of two children. 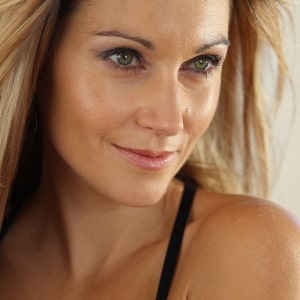 Nicole Glor is a married woman. She is married to an Emmy-award winner Journalist, Jeff Glor since 2003. The duo met the first time the Syracuse University.

After that, they began meeting regularly and started hanging outs, and became irresistible to one another.

After dating for a long time, they tied thor knot in the year 2003. The couple welcomed two children: Jach Thatcher in 2009 and Victoria Channing in 2015.

She likes to keep her husband healthy and she shows concern about maintaining the body shape of her fiancé. She often keeps him updated on his death but, being a food lover, he occasionally cheats on his diet behind the shadow of his wife.

The care for her husband shows that how much affection she possesses for him. The family is living together and there is no sign of divorce between the couple.

Who is Nicole Glor?

Nicole Glor is an American fitness expert and author who is well known for being the wife of the famous journalist Jeff Glor.

He currently works on the CBS Evening News as an anchor and managing director.

She was born on July 12, 1975, in New York, USA. She is currently 43 years old. Her father’s name is Stanley Glab and her mother’s name is Carole Glab.

She was raised in New York City. She was interested in athletic activities and sports since her childhood. During her teenage, she used to be a cheerleader.

She attended Sayre High School and later joined Syracuse University where she met her husband, Jeff Glor for the first time. She graduated with a Bachelor’s degree in broadcast journalism.

She is a professional health coach, group fitness instructor, and celebrity trainer. She has her own website in which we can find TV newsreel, fitness blog, video app, personal training, and health coaching.

Also, Nicole Glor is a freelance fitness writer during her free time. She wrote the book titled ‘The Slimnastics Workout’. Previously, she worked as a group instructor at Crunch Fitness and she is currently working as an instructor at Equinox in Greenwich, CT.

Her husband, Jeff is a renowned anchor and managing editor of the CBS Evening News. Previously, he worked as a co-anchor of WSTM-TV Syracuse’s 5 p.m. and also as a reporter for the 11 p.m. newscast.

She must have earned a decent sum of money from her career. However, she has not revealed her salary, net worth, and income.

Her husband, Jeff has an estimated net worth of around $3 million.

She has been successful in maintaining her personality and has not been involved in any types of rumors and controversies in her personal and professional life.

Nicole Glor has green eyes and natural silky blonde hair. Apart from that, other information regarding her height, weight, body measurement, etc. are not available.

To know more about Maria Canals-Barrera, Shelley Hack, and Eula Valdez, please click on the link.

What does Nicole Glor's husband does?

He is a popular journalist.

Does Nicole Glor have any kids?