Nicole Linkletter is a Fashion model and actress.

Nicole Linkletter is a happily married woman. In 2013, she gets tied the knot to Adam Nathanson.

Her husband is a director at Colony which is a collaborative design and branding studio in Los Angeles, California.

The couple is blessed with two children a son named Theo Nathanson and a daughter named Olive Nathanson.

Previously, she has been in a relationship with Philip Clarke White as per other online sources 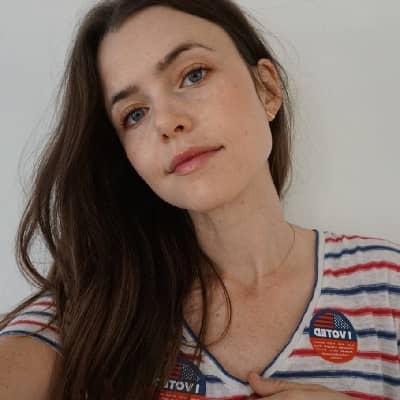 Who is Nicole Linkletter?

Nicole Linkletter is a Fashion model and actress. She is recognized as the winner of the 5th season of America’s Next Top Model.

Nicole was born on April 18, 1985, in Grand Forks, North Dakota. She holds an American nationality and is of mixed ancestors of Irish, Norwegian, English, Scottish, distant Dutch, and German. Her full name is Nicole Linkletter Nathanson.

The model is the youngest daughter of her parents Monica Linkletter and Steve Linkletter. Nicole’s father was a banker and her mother worked as a choreographer. Also, she has two sisters.

From an early age, she is interested and has a dream of being a model.

Moving towards her academic background, she attended the Red River High School in Grand Forks and graduated in 2003.

Then she enrolled at the University of North Dakota and St.Cloud State University in St. Cloud, Minnesota as a marketing major.

Furthermore, she features in various commercial and runway shows like she has walked for Gharani Strok Fashion Show, Alice and Olivia, Bebe, and more.

To date, she has not been in any rumors and scandals that create headlines in the media. She has maintained a well-profiled character.

Nicole’s primary income source is her career as a fashion model and has an estimated net worth of around $2 million.

As per other online sources, the average salary of a model is $49,200 per year.

The Model is a lanky girl who stands at the height of 5 feet 9 inches tall and her weight is around 58 kg. She has a stunning blue color of pair of eyes and her hair color is brown.