Nicole Mitchell Murphy won the International Model Search Contest when she was 14. Nicole is also a television personality, designer, and businesswoman. Previously, she was married and is a grandma as well. 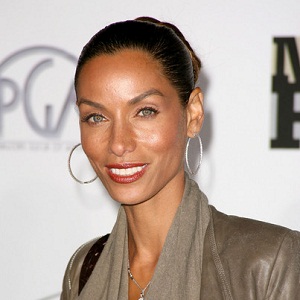 They met at NAACP Image Awards and had a very long romantic relationship.

Before their marriage, they lived together for 2 years and finally tied the knot on March 18, 1993, at Grand Ballroom of The Plaza Hotel in New York City.

They separated because of the high conflicts and misunderstanding among them.

Later Nicole had a relationship with Michael Strahan an American footballer with whom she even got engaged and stayed together for 5 years. The couple didn’t get married but separated because of the busy schedule in 2014. After her breakup with Strahan.

Who is Nicole Mitchell Murphy?

Nicole Mitchell is an American fashion model, television personality, designer, and businesswoman. She is known for her career in modeling and reality show participation on Hollywood Exes.

Nicole Mitchell was born on January 5, 1968, in Sacramento, California, USA. Her nationality is American and ethnicity is mixed(African-American-English).

Her father Eddie T. “Mitch” Mitchell, was a pilot in the United States Air Force and her mother, Ellen Mitchell was a British homemaker. Her mother expired on 14 November 2019.

Nicole is the elder child and has 3 younger brothers.

Nicole started her career in modeling when she was only 13. In her beginning, she started working in commercials. Soon a modeling agency in San Francisco signed her.

She has always been inspirational for new models. At the age of 14, she won the International Model Search Contest. She was also signed by Ford Modeling Agency just after winning the contest, after which she started traveling all over Europe.

She worked for the top design houses in Europe like Valentino, Chanel, Ungaro, Yves St. Laurent and many others. Nicole spent her 7 years in this field and later decided to retire and start her own business. She has a jewelry business of her own. She is a very successful businesswoman.

She has a net worth of $10 Million but her salary is not revealed yet.

She has been successful in maintaining a good public image throughout her career and has not been involved in any controversies to date.