Nicole Williams is a married woman. She tied the knot with her longtime boyfriend, Larry English on 19th May 2017 after being in a relationship for almost four years. The couple began dating in March 2014 and engaged in September 2016.

After spending a beautiful time together, Nicole and Larry decided to marry and then tied their knot in Laguna Beach. Since their marriage, the pair has maintained a perfect relationship between them.

As of now, there are not even single rumors of an extramarital affair. Currently, Nicole and Larry are enjoying their company and living elegantly. 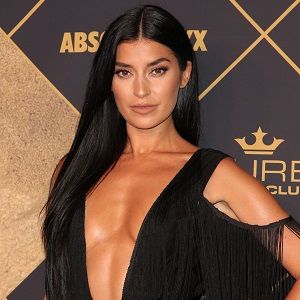 Who is Nicole Williams?

Nicole Williams is a Canadian model. She became famous after appearing in the E! Reality Series WAGS. So far, she has gained representation from Los Angeles Models, Major Models New York, Muse Management South Africa, and a few more.

Furthermore, she is also a social media personality which she has earned more than 1 million followers.

Nicole was born on October 30, 1987, in Toronto, Canada. Her father and mother’s names are not disclosed.

Talking about her nationality, she is Canadian and her ethnicity is unknown.

From the beginning of her childhood, she had a keen interest in acting and modeling. Besides this, she is also the wife of NFL player Larry English.

Nicole began her career as a model. As of now, she has already worked with various big names around the globe. She has worked with  Los Angeles Models, Major Models New York, and Muse Management South Africa.

Additionally, Nicole has also worked for Next Toronto, FM London, and Wilhelmina New York. Currently, she is one of the famous models. Furthermore, she has also done a photoshoot with Robin Thicke. Apart from that, this Candian model is also the wife of NFL player Larry English.

Being a famous model, Nicole earns a handsome amount of money from her profession. However, her salary and net worth are unknown.

As of now, she has never won any awards. However, she has been doing her job in the best possible way and her works have been also appreciated by her fans around the world.

So far, there are not any drastic rumors regarding her personal and professional life. Furthermore, she has never faced any controversy to date. It seems she has total focus on her work rather than stuck in any controversy.

Nicole Williams has a height of 5 ft 9 inches and weighs 57 kg. Furthermore, she has brown eyes and black hair.

In addition, her other body measurements include 34 inches bra size, 24 inches waist, and 35 inches hips size.

To know more about Mark Valley, Angela Rippon, and Shane Smith, please click on the link.