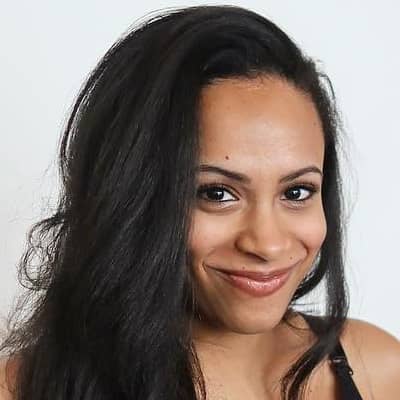 She met her husband for the first time on the set of the musical, Once on This Island in 2008 in Los Angeles. On April 23, 2017, the couple welcomed their first child a daughter named Lucille Ruby.

Similarly, the pair announced that they were expecting their second child in November 2020. Afterward, they were blessed with a second child a son named Able Phineas on March 25, 2021.

Who is Nicolette Robinson?

Nicolette Robinson is a renowned American stage and television actress. She is best known for her prominent role as Jane in the television show ‘The Affair‘.

Being a talented actress, she is also a talented musician who often shares videos of herself playing the piano and sing a song.

Nicolette was born in Los Angeles, California, the U.S. on April 18, 1988. She holds an American nationality and belongs to mixed descent of Jewish and African-American. The actress’s full name is Nicolette Kloe Robinson.

Her father, Stuart K Robinson is an African-American who is also an actor, director, and acting teacher by profession. Likely, her mother is white from the Ashkenazi Jewish ethnic group who is a choreographer.

But, she has never shared her parent’s identity including their names in the media. Also, there is no information available regarding her siblings.

Moving towards her academic history, Robinson studied at St.Bernard High School in Playa del Rey. Then, she attended the University of California, Los Angeles.

In college, she majored in musical theater and graduated in 2009. Furthermore, she also received a scholarship from the Jackie Robinson Foundation.

Nicolette started her acting career at an early age. While in school she performed in multiple stage production like UCLA’s Awaken A Cappella. In 2012, she starred in a musical stage, Lempicka in the role of Suzy Solidor.

The musical is based on the life of Tamara de Lempicka premiered at the Williamstown Theatre Festival in Williamstown, Massachusetts. Similarly, she made her Broadway debut in 2018 in Waitress where she portrayed the role of Jenna.

In 2010, she made her television debut in the recurring role of Isabella in Perfect Couples. Afterward, she appeared in the 1st episode of Unforgettable where she was cast in the role of Mena.

Lately, she starred in the main role of Sade in 2020, Love in the Time of Corona. Moreover, she also appeared in the 2020 film, One Night in Miami where she portrayed the character of Barbara Cooke.

To date, Nicolette has not appeared in any sorts of rumors and disputes that create headlines in the media. Also, she has maintained a clean image and stays miles away from any controversial acts.

Being a notable actress, Nicolette might have earned a fair amount of net worth. But, she hasn’t yet revealed her exact net worth, salary, and other assets.

Taking about her husband’s net worth, Leslie has earned an estimated net worth of around $10 million throughout his movies and TV work.

The actress stands at the height of 5 feet 5 inches tall and her weight is around 52 kg. She has black hair with black pair of eyes. Furthermore, her other body measurement is still under review.

Who is Jeremiah Raber? All about the show ‘Return to Amish’, difficult childhood, married life