Updated On September 4, 2020 | In Married , Relationship , Wedding
Share this 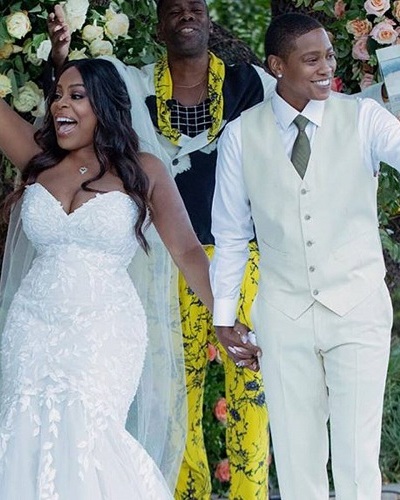 As the COVID-19 graph in many countries is flattening, news of celebrity weddings is making headlines! The latest to join in this list is American comedian, Niecy Nash. The lesbian actress married her partner, singer Jessica Betts. She shared the happy news with her fans on Instagram.

American actress, Niecy Nash shared the happy news of the wedding with her fans on social media. She and her lesbian partner, singer Jessica Betts exchanged wedding vows. Niecy, 50 wrote on her Instagram for her fans on Monday 31 August 2020:

I love you, friend. It was an honor to witness your wedding to Jess. May you both have more happiness than your hearts can hold. xo pic.twitter.com/DKeoxDN4Jb

This is her new married name. And she put the hashtag #LoveWins. Niecy also uploaded a photo of the two together. She also put this same on her Twitter handle. The photo shows the two dressed in white and happily holding hands at their outdoor wedding function. Niecy was in her white lace gown while Jessica had worn a cream-colored suit but with no jackets. Jessica had also posted the wedding photos on her Instagram. But she put a different caption which read:

More about the wedding

Additionally, Niecy also posted another photo on her Instagram Story and wrote below it:

She followed this with a rainbow emoji. The exact detail of the wedding date and function is not available. Hence, the wedding was a secret one and has left many of their fans surprised and stunned. This was the first time that her followers came to know that she is a member of the LGBT+ community. She had never gone public about her sexuality until now.

Bob the Drag Queen who won RuPaul’s Drag Race was happy with the news and tweeted:

“Finding out that Niecy Nash is queer is the best thing to happen this year!!!!!!!,”

“I have said before that Niecy Nash is finer than fine, thicker than grits. I am so happy to hear she is queer. And married,”

Reactions of their fans and friends

Award-winning director AvaDuVernay uploaded a short clip of the two cutting the wedding cake and wrote:

“I love you, friend. It was an honor to witness your wedding to Jess. May you both have more happiness than your hearts can hold.”

Niecy was part of series such as Reno 911!, When They See Us, and the like. She was host of Clean House home makeover show from 2003 to 2010. Other celebrities who congratulated include Halle Berry who wrote:

Less than one year back, Niecy had divorced her husband of 8 years, Jay Tucker. Designer Kimora Lee Simmons wrote:

“Beautiful! Love to you both,”

“Congratulations!! So much love to you both!”

Mindy was the creator of the ‘The Mindy Project’ in which Niecy had starred and played the character of a lesbian doctor. This was in 2014.