Nigel Barker is an English reality television show personality. He is married and a father of two kids.

Talking about the relationship status of Nigel Barker, he is married to Crissy Barker. The couple has been in a married relationship for the past 17 years.

They married after dating for a year on October 16, 1999, and were blessed with two children Jack and Jasmine. Being a well-known celeb, his fans are always curious to know more about her personal as well as his love life. 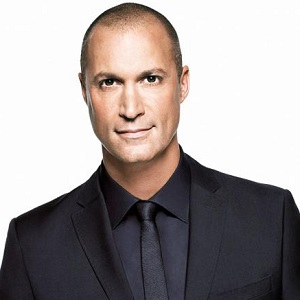 For a selfie, it's not about the pose, it's about you. There's a reason why you look great in the picture or you look great in real life, because someone has caught the essence of who you are, and a pose is not you

Someone who is comfortable, someone who is happy, you see them immediately sit up, stand up and feel better about themselves. If you're able to capture that in a picture, that's the most beautiful picture you can ever take of someone.

Who is Nigel Barker?

He is best known for his appearance as a judge and photographer on the reality television show ‘America’s Next Top Model’. Currently, he hosts a reality show ‘The Face’. He is also a spokesperson.

Barker was born in London, England on April 27, 1972. He was born with mixed ethnicity of British, Irish, Portuguese, Sri Lankan, and English nationality.

He was born to an Irish and Portuguese descent father and Sri Lankan ancestry mother. His mother was a formal Miss Sri Lanka which influences him towards modeling as he grew up. Barker lived with his family and five siblings until the age of 18.

He studied A-levels in biology, chemistry, and physics at a boarding school, Bryanston School.

Barker started his career journey from the televised British model search ‘The Clothes show’ where he appeared as a constant. He came as the finalist and began his model journey.

Nigel traveled all around the world for 10 years including London, Milan, Paris, and New York City as a model. He transformed himself into a fashion photographer from a model and started running his photography studio, studio NB based in Manhattan in 1996.

He rose to fame rapidly for his photos and began taking photos for magazines, websites, and catalogs as well as of celebrities.

Later he became a judge for other countries’ top models as well including Canada, New Zealand, Mexico, and Benelux. He even appeared as the official Judge for Miss America Pageant and Miss Universe Pageant.

Barker has also produced a reality show ‘The Shot’ on VH1 which featured photographers using their skills to win an ultimate grand prize.

He is a spokesperson for different brands including Crest White Strips, Nine West, Microsoft, and Sony. He even published a book on beauty which was released in September 2010.

Nigel Barker: Salary and Net Worth

Barker suffered a controversy when Tyra Banks fired him alongside Jay Manuel and J. Alexander.

Nigel Barker has a height of 6 feet 3 inches. His body weighs 81kg. He has dark brown hair and dark brown eyes.

Besides these, his shoe size is 11 US and his dress size 8 US.