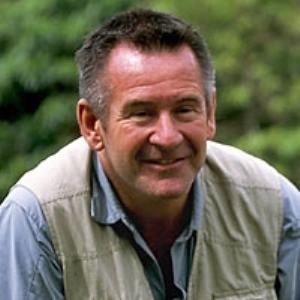 Nigel Marven is currently single and not in a relationship with anybody.

He has two children from his past relationship: Eleonora Marven, and Theo Marven.

Previously, Nigel was married to Jenny Hull in September 1996 and divorced in 2000 after four years of marriage.

Who is Nigel Marven?

He ran the 2008 London marathon in 4 hours 4 minutes to try to raise £20,000 for the Whale and Dolphin Conservation Society UK.

Marven was born as Nigel Alan Marven on 27 November 1960, in Barnet, London, England, UK. His mother’s name is Pamela Blackburn and father’s name is unknown. Marven was brought up in St. Albans.

As a child, Marven loved animals. His first pet was a hamster, called Hummy. He kept stick insects, boa constrictors and even an eel in a bath. When he was 15, he got young spectacled caiman too.

Marven attended Bristol University, studying botany, until the age of 22 when he left to begin his career at the BBC Natural History Unit in Bristol.

Marven started his career working firstly as a wildlife documentary researcher for programs like The First Eden, & My Family and Other Animals. He then went on to produce series like Realms of the Russian Bear.

Marven enjoyed a 12-year professional collaboration with David Attenborough, whom he holds in high esteem. In 1998, he moved to ITV where he was asked to present wildlife documentaries as well as producing them.

In his first television series for ITV entitled Giants, he swam with a great white shark without any protection of a cage. Other scenes included a goliath bird eater spider, arguably the largest spider in the world, walking over his face, and Marven grappling a fifteen-foot African rock python deep in its underground lair. This style of presenting has won him many viewers. To date, Marven has presented more than 30 wildlife programs and series for TV.

In 2002, the Impossible Pictures production company asked him to present the two episodes of Walking with Dinosaurs. He then, moved on to Prehistoric Park on ITV, a fictional series about traveling back in time to rescue examples of extinct creatures such as a Tyrannosaurus, Woolly Mammoth, Arthropleura, and others.

In 2009, Marven featured in season 3, episode 4 of hit action drama Primeval. In the episode, he is seen playing with a baby Velociraptor before encountering a Giganotosaurus, which, it is implied, eats him off-screen. Both these series were also made by Impossible Pictures.

His currently airing series Ten Deadliest Snakes, was the first broadcast on Animal Planet in the US in spring 2014 & on Eden in the UK in June that same year. Season 2 premiered in autumn 2015 on Eden, while season 3 began airing on the 5th January 2017 on Nat Geo Wild in the UK. Highlights of Ten Deadliest Snakes included, among others, visiting sea krait caves in the South China Sea.

During summer of 2014, Eden Channel started a new competition for aspiring wildlife filmmakers called Eden Shorts. The task was to make one-minute videos with animals, the best ones to be shown on TV. Nigel Marven, along with Michaela Strachan, served as a judge, & also made some short how-to-guides, available through Eden Channel’s website. In May 2015, Eden premiered the film Eden Shorts: From Lens to Screen presented by Marven.

Marven has been in various close encounters during his wildlife career. He was bitten by a venomous green pit viper in East Malaysian state Sabah in 2014 while filming the first episode of Eating Wild. While producing the BBC film The Serpent’s Embrace in the 1980s, a spitting cobra sprayed its venom into his eyes. A similar encounter happened in December 2008, while making a short film about black-necked spitting cobras. Though he wore a mask, the venom landed in his hair, then mixed with sweat & ran into eyes. In his 2008 series Jaguar Adventure, he was bitten by a mildly toxic venomous false water cobra.

In his 2004 nature documentary Bull Shark: World’s Deadliest Shark, Marven was in the Bahamas & stood with shark expert Erich Ritter in the water surrounded by sharks. During the filming, a bull shark attacked Ritter’s leg, giving him a 30-cm bite to his calf. Marven still recalls it as one of the most dangerous moments in his career.

In the third episode of 2012 series, Wild Colombia Marven was bitten by a non-venomous Central American tree boa on his nose, causing blood to cover his face. A similar encounter happened in his 2013 show Ten Deadliest Snakes: China with a king ratsnake.

Marven is a Panda Ambassador for Chengdu Panda Base in China, a patron of The Great Fen Project for restoring vital wildlife habitat, Healthy Planet through which he adopted a plot of land for helping to create new wildlife habitats, and Vale Wildlife Hospital, company that treats injured wildlife in England. He is also a patron of the ORCA organization, which protects whales & dolphins in European waters.

Many of his TV wildlife programs also seek to highlight the conservation of nature and endangered species. In 2016, Marven produced & narrated a short film featuring the work of Black Mamba Anti-Poaching Unit, who are fighting against rhino poaching in South Africa.

Marven was nominated for BAFTA TV Awards in 2000 for Best Features. In 2015, he was nominated for Donald Gosling Award by Maritime Media Awards for his series Nigel Marven’s Cruise Ship Adventures. Next year in 2016, Marven received an award from Cruise Lines International Association.

Nigel Marven’s Salary and Net Worth

The exact salary figure and net worth value of Nigel Marven are not known till date.

There are no any much significant rumors and controversies regarding Nigel Marven in the mainstream media available yet. He has thus, managed to keep his image clean in the eyes of the general public.

He has a height of 6 feet 2 inches. He has salt and pepper hair color and his eye color is brown. There is no information about his shoe size.