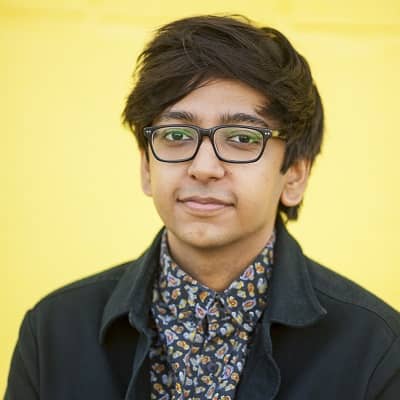 Nik Dodani is in a relationship. His boyfriend’s name is Michael P. Johnson.

This couple began dating in 2015 and often posts pictures together on Instagram.

Who is Nik Dodani?

Nik Dodani is an American comedian and actor. He is best known for his roles on Atypical, Murphy Brown, and Escape Room.

This actor was born on 19 December 1994, in Dallas, Texas, in the United States.

His parents are originally from India and later, migrated to the US. He graduated with a Bachelor’s degree in politics from Occidental College. He belongs of Asian descent.

Nik is an activist, comedian, and actor. He has performed stand-up comedy across the country. His performances have been featured in various media outlets like The Huffington Post, Buzzfeed, and more.

Earlier in 2016, he worked as a producer for MoveOn.org during the Presidental campaign. On Elizabeth Warren’s 2012 Senate campaign, Nik worked as a student organizer and graphic designer.

He first appeared on television in 2008 as ‘Paku’ in the TV movie Living with Abandon. After a gap of a few years, Dodani played Harry in The Comeback, and Bookstore Employee in the TV series ‘Selfie’.

In 2015, his actor made his appearance in Kevin from Work, and The Player. Since 2017, he is starring as Zahid in the comedy-drama television series Atypical from which he gained huge popularity.

His other works on television include Idiotsitter, Murphy Brown, Angie Tribeca, and Trinkets.

In addition to television, he has also worked on several films. In 2016, Nik starred in 3 movies Other People, ‘Goodbye, Felix Cheste’, and The Good Neighbor.

Similarly, he made his appearances in Alex Strangelove, and Dark Was the Night. Later in 2019, Dodani played Danny Khan in the psychological horror film Escape Room.

His upcoming projects are ‘Mark, Mary, and Some other people’, and ‘Dear Evan Hansen’. Nik is openly gay and actively involved in LGBTQ rallies and programs.

The average salary of this comedian is under review. Meanwhile, according to some sources, Nik has an estimated net worth of $2 million.

Nik hasn’t been in any drastic rumor and scandal. Meanwhile, this actor has managed to keep himself out of any rumor and controversy. He is doing great in his career.

Nik Dodani is 5 feet tall with a weight equivalent to his height. Similarly, he has black hair and dark brown eyes.