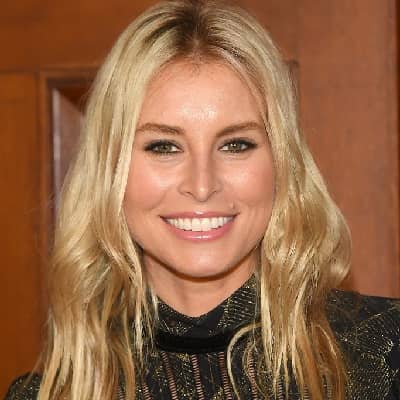 I always hated my mole growing up. I even thought about having it removed. At the time I didn't do it because I thought it would hurt, and now I'm glad I didn't

Stick to the basics, hold on to your family and friends - they will never go out of fashion

My greatest life lesson has been that life can change in a second. This is why it's important to always live your best possible life and to do what you can for others.

Niki and Burney started dating from January 2006 after she met him during an autograph session. The couple engaged in October 2006 and married on December 27, 2006, at Grande Colonial Hotel in La Jolla, California. They also requested their guests to give donations to Victory Junction Gang Camp, instead of giving gifts to them.

The couple welcome their daughter Ciel Taylor Lamar on March 4, 2009. Likely, their son Rex Harrison Lamar was on November 16, 2011.

Before, it, Niki dated an American criminal, Chris Paciello in the past.

Niki and former Miami Hooters linebacker, Matt Martinez were also married at a time. They met for the first time during a coin-toss at an Arena football game in Miami. On July 19, 1994, she married Martinez in a traditional wedding ceremony in Idaho.

She was 4-months pregnant during her wedding. Further in December 1994, she also gave birth to twin sons Jake and Hunter. But after some years living together, the couple separated in the year 1996.

Canadian ice hockey player, Rob Niedermayer and model Niki also dated for a couple of months from 1998 to 1999.

She also had an affair with New Zealander musician, Keith Urban in around 2002 to 2004.

Who is Niki Taylor?

Niki Taylor is one of the popular names in the modeling industry. She is a supermodel and also worked as a television presenter. She is in the Guinness book of world records as the youngest model to sign a six-figure deal.

She was born on March 5, 1975. Her birthplace is Fort Lauderdale, Florida, United States.

Her parent’s names are Ken Taylor, father and Barbara Taylor, mother. Ken was a Highway patrol lieutenant, likely, Barbara was a photographer.

She has an older sister, Joelle Taylor. Likely, her younger sister Krissy Taylor who was a model died on July 2, 1995, due to arrhythmogenic right ventricular dysplasia.

Niki holds an American nationality, and she belongs to Mixed (French, Norman, and Latin) ethnicity.

Niki Taylor commenced her modeling career at an early age. At the age of 13, she signed a contract with Irene Marie Models and got introduced to Jean Renard, who also became her manager.

She gained stardom from an early age. In 1992, she was the first spokesmodel under 18 to be placed under an exclusive contract with Cover Girl Cosmetics.

Moreover, at the age of 14, the model graced the cover of Seventeen. After that, she appeared on the cover of Vogue and becoming the second-youngest person to do so after Brooke Shields. Similarly, in 1991, this model was the youngest one to be on the People magazine.

Niki has featured over 300 magazine covers worldwide including Mademoiselle, Vogue, Harper’s Bazaar, Allure, Elle, Self, Shape, Marie Claire, Cosmopolitan, and Glamour. Moreover, Niki is the only model that appears on the six various popular American magazine covers in the same month.

Also, Nikki features in the Sports Illustrated 1997 Swimsuit issue and for their TV show, and on the cover of their 1998 calendar. Aside from this, the stunning model has done numerous ad campaigns with a famous company.

Some of them are Versace, Pantene, Jean-Paul Gaultier, Anne Klein, Gap, L’Oreal, Thierry Mugler, and more. She is also the national advertising campaign for Cover Girl, Liz Claiborne, Nokia, Ellen Tracy, Lee Jeans, and many others.

Additionally, Niki’s image has sold billions of dollars being the bestseller also. Her sales ability and interest in brands and events became popular in the industry between the insiders as the “Niki effect”.

Taylor appeared on a talk show The Doctors in 2011 in an episode titled How to Supersize Your Health!. She appears in a 1995 documentary movie Unzipped and also receives credits with very special thanks for her work.

Likewise, this model became a television host in the shows such as The Amazing Race, The Early Show, among others. Furthermore, Nikki features in the Sports Illustrated 1997 Swimsuit Issue’ TV Show after appearing in its calendar.

Taylor is an American Red Cross ambassador. Further in the “Visit Music City” campaign, she was the cultural ambassador of Nashville city.

Niki was a contestant on the fourth edition of The Celebrity Apprentice on March 6, 2011. Donald Trump even commented on how he had a lot of respect for Taylor to take responsibility for the loss in her third task.

On 29 April 2001, got into a life-threatening car accident in Atlanta, Georgia. During that time, her then-boyfriend Chad Renegar was answering his call. Suddenly he lost control of the car and crashed into a utility pole.

Nikki gets thrown out from the vehicle and resulted in severely injured, liver damage, and a collapsed lung. Even more, two steel rods implantation was done on the back to support her vertebra.

In addition to this, Niki was left in a coma for six consecutive months and then bedridden for a month. Altogether, she went through 56 operations and physical therapy at Grady Memorial Hospital, located in Atlanta for her recovery.

She has amassed a good amount of money from her modeling career, projects, pageants, and many more. Her net worth is around $18 million.

Niki was a branding value from Wall Street of 100 million dollars. Niki was only the model who was approved to sell her calendar in the world’s top retailer, Wal-Mart. Further, she also becomes a bestseller.

The model now resides lives in a 7 acres house in Brentwood, Tennessee, the USA. Within a doubt, she is having a lavish lifestyle with her family. Apart from it, she has other houses too.

She once has legal action against the publisher of British Glamour and Cosmopolitan magazines. She did it when she was photographed with scars after her car accident along with her boyfriend.

Niki has several tattoos, but most of them are airbrushed during magazine cover shoots and other campaigns.

Furthermore, She has her own YouTube channel with 1.89K subscribers.

Also, get to know the bio of other models like Alex Lange, Francesca Farago, Carla Campbell, and Fernanda Tavares.