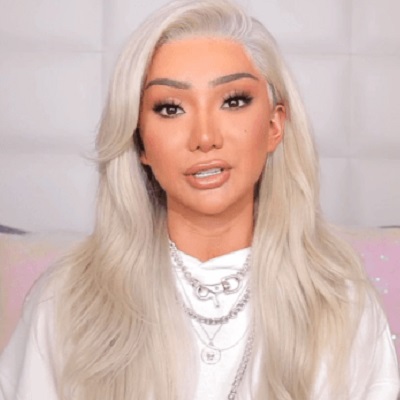 Every single woman is beautifully unique, and the sexiest thing she can do is own her curves, embrace her differences, and stand tall in exactly who she is

Whenever I need that extra confidence booster, whenever I want to feel that extra chic-edgy, I grab red lipstick.

Previously, Dragun is in a relationship with a model, Michael Yerger.

Later, they broke up because of Dragun felt that Michael only used her to upgrade his career. As of July 24, 2019, she uploaded a video titled, I got my heartbroken. In this video, she expressed her feelings after Michael cheated on her. Prior to that, she also dated fashion designer Oscar Utierre.

Who is Nikita Dragun?

She is best known from her self-titled Youtube channel and her makeup tutorials as well as different challenges.

As of January 19, 2020, she uploaded a video titled, Learning How To Be Latin En Espanol, on her own Youtube channel.

Nikita Dragun was born on January 31, 1996, in Belgium. Her birth sign is Aquarius.

Dragun born as a male and later became a transgender woman. Everyone is interested in her past life. She keeps sharing her old pictures on social media.

Dragun has a self-titled YouTube channel with 2.63 million subscribers. She joined a Youtube community on February 1, 2013, and this channel has reached views in million. When she started her youtube channel she was offered by different brands. Then, in 2015, she seriously chooses this profession as a YouTuber and Instagrammer.

Dragun became a YouTube sensation after posting her different beauty tutorials, vlogs, as well as challenges on a different subject.

Dragun is the CEO of the cosmetics brand, Dragun Beauty. In March 2019, she started this brand deals mostly targeted to the transgender community as well as want to make LGBT Friendly Brand.

But, this brand is for everyone who is concerned about her glamour and beauty. The main motive of the Dragun Beauty organization is to empowering beauty lovers and sexualities.

This brand has its own Instagram with id dragunbeauty.

In 2018, Dragun Portyred the role of The Troublemaker, in American Murder-mystery reality web series, Escape the Night. It was created by Joey Graceffa.

She also appeared on the American reality television series, The Real Housewives of Beverly Hills.

Dragun’s net worth is approximately $3 million.

Nikita has been part of many controversies. When she launched her new eyeshadow palette people called it useless and expensive.

Also, she was criticized for treating Princess Mae in a bad way and body-shaming her.

Once she hired herself a boyfriend which made her become part of a controversy.

Dragun has dark brown eyes and dark hair. But she always wears wigs. Her height is 5 feet 3 inches and weight is 50 kg.