Nikita Kucherov is a Russian Ice Hockey World Champion. He loved ice skating since his childhood and he would play with his elder brother who is three years older than him. Nikita is married.

Nikita Kucherov is married to Anastasiya Kucherova. However, their wedding details are unknown.

Nikita and Anastasiya have a child together named Ean Horford. 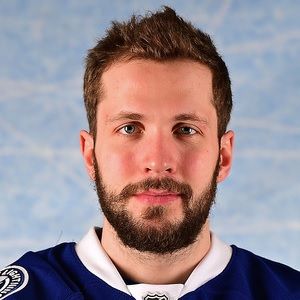 Who is Nikita Kucherov?

Nikita Kucherov is a Russian professional ice hockey player. He mainly plays as a winger.

And, he is widely popular as a player for the Tampa Bay Lightning of the National Hockey League. He also represents his country in international hockey matches.

Nikita Igorevich Kucherov was born on June 17, 1993, in Maykop, Russia. He is of Caucasian ethnicity.

His father, Igor is a colonel in the Russian army, hence his mother also moved with his dad where his postings were.

Therefore, Nikita spent most of his childhood with his grandmama and aunt from Maykop. His grandfather was also an army man and his grandmother works at the city’s football team Druzhba.

He has an elder brother, Denis. He and his brother would share the same pair of skates while practicing when young. However, Denis quit skating and was into the e-commerce business as a sales director.

As regards Nikita’s academic qualifications, that detail is currently under shades and only he can enlighten us.

In the early part of his professional career, Nikita Kucherov played in Kontinental Hockey League. He was a very good player even at the start of his career.

By the year 2011, he was playing for the under 18 national team of Russia. He also represented his country in the U-18 World Cup. He played a vital role in the tournament. With a good result, Russia was able to win a bronze medal.

At the same time, Tampa Bay Lightning selected him from the 2011 NHL Entry Draft and has remained on this very team till now.

Playing in NHL has given him enormous fame and wealth as well. He started his NHL career in the 2013-14 season. His debut in NHL went very well with a hat-trick and major important goals.

In the 2015-16 season, he was able to set numerous records. As a result, he re-signed a three contract with Lightning.

In the 2016-17 season, he finished second for goals and sixth for points in playoff scoring. He also was able to name a second hat-trick to his name. And so far, he has been a star for the Tampa Bay Lightning.

As part of his international career, he has also represented Russia in the World Junior Ice Hockey Championship, Ice Hockey World Championship and World Cup of Hockey.

In 2017, he was an integral part of the Russian national team that won a bronze medal in the Ice Hockey World Championship.

As a result of his successful professional career, he has a list of awards under his name.

In 2016, his salary for representing Tampa Bay Lightning was $12 million. In addition, his net worth is about $20 million.

Nikita has maintained a fair distance with controversial topics. In addition, there are no rumors about his personal life so far. In the past, there were some false rumors about him leaving NHL.

Nikita Kucherov is 5 feet 11 inches tall guy and he weighs about 82 kg. Furthermore, he has brown hair and green eyes.

However, many other details of his body measurement are currently unavailable.