Nikita Nesterov is a Russian professional ice hockey player. He is a defenceman. Nikita is married and the couple has one kid.

Nikita Nesterov is a married man. He married Ekaterina Sirotina on June 25th, 2015. Yekaterina is a native of Miass and is the daughter of a well-known public man and businessman Oleg Sirotina.

The wedding took place in the Miass registry office and completed a modest family celebration. She is the master of sports of ballroom dancing. 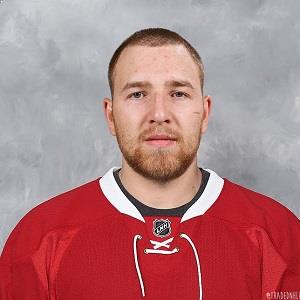 Who is Nikita Nesterov?

Nikita Nesterov is a Russian professional ice hockey defenceman currently playing with CSKA Moscow in the Kontinental Hockey League (KHL). He made his NHL debut on December 31, 2014.

Nikita was born in Chelyabinsk, Russia on March 28, 1993. Information regarding his parental background is not available at present. He became interested in the world of ice hockey in his early life.

Other information regarding his childhood years is missing at present. He is of Russian nationality and ancestry.

Talking about his education, there is no detailed information regarding Nikita’s educational background.

Tampa Bay Lightning selected Nikita Nesterov in the fifth round, 148th overall, of the 2011 NHL Entry Draft Additionally, he was also drafted by the Kontinental Hockey League (KHL)’s Traktor Chelyabinsk, who selected him in the first round, 22nd overall, of the 2010 KHL Junior Draft. Later, on April 30, 2013, he signed a three-year, entry-level contract with the NHL’s Lightning.

The Tampa Bay recalled Nikita on December 31, 2014, from the Syracuse Crunch, the team’s American Hockey League (AHL) affiliate. Additionally, on December 31, 2014, he also made his NHL debut in a 5–1 Lightning victory over the Buffalo Sabres. He played in his first career NHL Playoff Game recording his first playoff goal and a point on April 16, 2015.

National Hockey League announced that it was suspending Nikita for two games without pay for boarding Dallas Stars forward Curtis McKenzie. Eventually, the Lightning traded Nesterov to the Montreal Canadiens in exchange for Jonathan Racine and a 6th round pick in the 2017 NHL Entry Draft on January 26, 2017.

Nikita was one of the team Russia’s 2016 World Cup of Hockey roster as a replacement for Slava Voynov on July 18, 2016. Nikita Nesterov currently has a salary of 725,000 USD.

Furthermore, as per 2022’s data, he has an estimated net worth of $1 million.

Nikita has kept his personal life and career away from any notable controversies to date.

There were rumors about Nikita’s return to the KHL when Traktor Chelyabinsk placed his name on the roster on their website.

Additionally, on July 6, 2017, Nesterov’s agent posted a tweet stating that Nesterov had decided that he was going to return to Russia to play in the KHL.

Nikita is not quite active on social media sites. He has more than 59.6k followers on Instagram and has posted more than 150 times.