Posted by MarriedBiography Posted on March 7, 2021 | In Career , Child
Share this 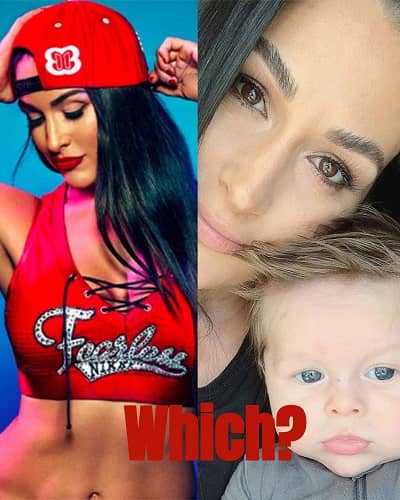 Nikki Bella has a debate with herself whether she wants another baby or to return to WWE. Recently, Nikki revealed that she wants another baby with her fiance Artem Chigvintsev after welcoming son Matteo in July 2020. Bella also wants to be back in the WWE business but she has a decision to make. She revealed,

Nikki revealed that it makes her feel bad that her son has to go to bed alone. She wants a sibling for him to be with. But she wants to be in WWE which keeps her in huge confusion. She added,

“The thing is, I want to get back in the wrestling ring. There’s so many things I want to do, and I feel bad. … I just don’t think I have time.”

When she was in The Ellen DeGeneres Show in January 2021, she revealed that there is the possibility of her returning to wrestling. She revealed that she and her twin sister Brie would be back. Nikki has a huge decision to make and fans are hoping that she would make the right decision.

Also read Artem Chigvintsev and Nikki Bella unsure of their wedding date, but will be changing the venue to out of LA!

Nikki Bella is a famous American wrestler, actress, and model. Her real name is Stephanie Nicole Garcia-Colace. She is best known for her time in WWE Raw and WWE SmackDown. Nikki is the twin sister of former wrestler and model Brie Bella. She is famous as Bella Twins, a tag team with her sister Brianna. Read more bio…