Nikki Bella reveals that her exes keep in touch with her family; John Cena is especially very close to her grandma! 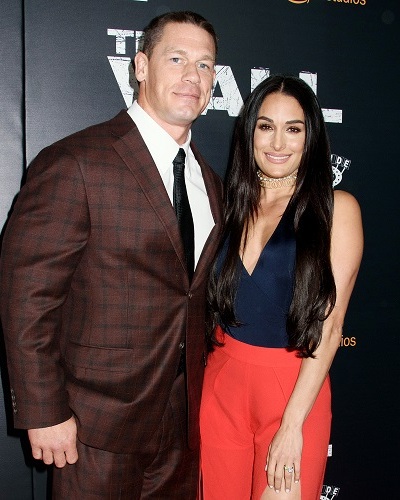 WWE wrestler Nikki Bella might have called it quits with her ex-fiance John Cena more than a year back. But she had something good and lovable to talk about him. Nikki revealed that though John and Cena have broken up, he is still in contact with her grandmother. He is very close to the old lady and calls her regularly.

Nikki Bella, 35 was attending the USA Today’s Wine & Food Experience which was held this Saturday 7 September 2019 in Brooklyn. On the occasion, she told US Weekly:

“He’s so good to my grandmother, it’s amazing.”

“My exes, they keep in touch with my family. They talk to my family but not to me.”

Brie Bella and Nikki Bella will have their 10-city USA Today’s Wine and Food Experience tour this fall. They will be promoting and making people taste their Belle Radici Wines. Brie also revealed that John Cena, 42 and their grandmother are indeed very close to each other. They share a special bond which is unbreakable. But when asked whether John keeps in touch with her as well, Brie did not directly answer the question as a yes or a no. She just said that John is in touch with most of their family members.

Does the no-talk from John Cena with Nikki Bella upset her?

John talks to her grandmother but not her. So does it bother her? Nikki disclosed:

“I’m, like, a very spiritual person so I think the majority of my boyfriends ended up being my friends because I always felt like even though you’ve had a breakup, you’ve had this strong connection with someone in your life, why not keep them in your life?”

“Like, I’ve never had an issue with that and vice versa, like I love it because it’s like I spent so long with that person and they gave me so much and I gave them so much so I love how they’re still in contact with my family.”

WWE wrestler Nikki Bella and John Cena were in a relationship for 6 years. They had even got engaged during the Wrestlemania 33 on 2 April 2017 and a wedding date was also fixed. But in April 2018, the couple broke the engagement. Nikki now is dating her former dance partner of the show Dancing with the Stars, the Russian man Artem Chigvintsev.

John Cena was spotted this March in the company of Shay Shariatzadeh. Later, in July the duo was backstage hanging out at the Tampa’s WWE Raw taping. That same week, they were on a dinner date together and were picturized kissing each other.