Nikki DeLoach is a married woman. She married her boyfriend Ryan Goodell. They married on September 5, 2009. Ryan is a legal representative and actor.

Similarly, their marriage ceremony was conducted in the Church in appearances their families, relatives, and close friends.

Likewise, she revealed that she was pregnant in April 2013. They welcomed a baby boy named William Hudson on 23rd October 2013, in Los Angeles, California.

Then on September 20, 2017, this couple welcomed their second son, Bennett Christopher Goodell.

At present, Nikki lives in Los Angeles, California with her husband and son. The couple looks very happy together and there is no sign of divorce between them. 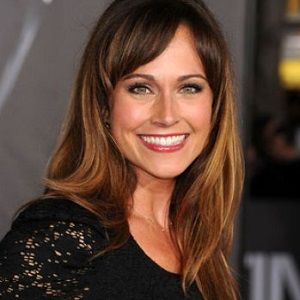 If I wasn't an actress I'd definitely want to do something in the arts and something that was very creative.

I actually have a lot of guilty pleasures.

Who is Nikki DeLoach?

Nikki DeLoach is an American actress and singer. She is a well-known celebrity featured in the TV movie The Perfect Catch. Similarly, she is known for the movie Love & Other Drugs.

She is famous for playing the main character of Lacey Hamilton on MTV’s Awkward.

She was born on 9th September 1979 in Waycross, Georgia, the U.S. Similarly, she is the daughter of David DeLoach and Terri DeLoach.

Her mother Terri is the superintendent of Pierce Country School and her father is the owner of a wood products company.

Likewise, she has a younger brother Brett DeLoach and younger sister Leanne DeLoach. Her nationality is American whereas her ethnicity is mixed with English, German, Scots-Irish, Scottish, and French.

During her childhood she was involved in the pageant world, winning numerous state and the national title.

Talking about her education, after completing her graduation, she went to the University of Maryland, where she earned degrees in English and Psychology.

Nikki DeLoach made her first public performance as a preschool child at the annual talent show at Pierce County High School in Blackshear, Georgia.

Similarly,  she involved in the pageant world, winning numerous state and national titles. She secured an agent for modeling at a young age and landed several jobs for print ad modeling.

Similarly, she started appearing on TV roles from 1993 on The All-New Mickey Mouse Club. Later, she moved on to work in the music industry and was a member of the girl group Innosense. Moreover, the group had a cameo in the movie Longshot before calling it quit in 2003.

Likewise, she featured in the series North Shore and has made a guest appearance in CSI: NY, Cold Case, Grounded for Life, and Texas Ranger. Furthermore, she played several movies like The House Bunny, An American Carol, The River Why, and many others.

After that, she made her appeared in Love & Other Drugs as Christy. In the year 2011, she was the main cast of Awkward as Lacey Hamilton.

She has won numerous state and the national title in the pageant world. Similarly, in the year 2014, she was nominated for the Best Performance in Comedy for Another Happy Anniversary and she won the Award.

The estimated net worth of Nikki is around $1 million as of 2022. She might earn a huge amount of money from her career but she has not revealed her salary and incomes.

Nikki DeLoach is successful in maintaining her career. Likewise, he has not been part of any rumors and controversy yet.

Talking about the body measurements of Nikki DeLoach she has a height of 5 feet 5 inches and weighs around 58 kg.

Similarly, she has a body measurement of 34-26-36 inches. Likewise, she has blonde hair and hazel color eyes.