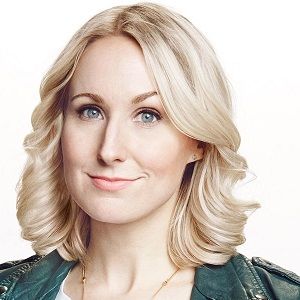 People are just so insensitive because they're ignorant

they don't understand, so they're scared of what they're ignorant of.

Someone told me I looked like a young Tonya Harding recently, as if 'young' would soften the blow.

The transgender bathroom thing - it's just so obvious that people are scared of what they don't understand. It's like, 'I don't want to deal with the fact that some people might have been born in the wrong body.'

A little or none is known about her love affairs because she likes to keep a very low profile. Many of her fans and media try to dig into her, trying to find her boyfriend is and who she is dating, but nothing can be found till date. Nikki Glaser is currently single.

Who is Nikki Glaser?

Nikki Glaser is an American stand-up comedian, podcast host, writer, producer, and television host. She is the host of the television series Not Safe with Nikki Glaser, which premiered on Comedy and Much on February 9, 2016.

Nikki Glaser was born on June 1, 1984, in Cincinnati, Ohio. She has German and Irish ancestry.

Her birth name is Nicole Rene “Nikki” Glaser. She is the daughter of Julie E. (nee, Burke) and Edward j. Glaser. Nikki spent most of her childhood in St. Louis, Missouri. She later moved to Los Angeles.

Nikki Glaser graduated from Kirkwood High School, attended the University of Kansas, and graduated with a degree in English Literature.

Nikki Glaser began her career as a stand-up comedian at the age of 18. Within less than two years she became the semi-finalist on Last Comic Standing. Ever since she started performing on the late-night shows labeled “The Tonight Show with Jay Leno” and “Conan”. She also performed in the “late Comic Standing” in the last episode.

In 2011, she began hosting the podcast called “You Had To Be There” with her fellow comedian Sarah Schaefer and she left in 2014. Then the comedian appeared in the life advice podcast called Giant Bomb in March 2014.

She also co-hosts “We Know Nothing” alongside Phil Hanley and Anya Marina. The podcast focuses on giving advice to the audience about their Love life in a comedic way. She resigns from the podcast in 2005 due to her private life interference with the show. In 2013, she began hosting a talk show on television called “Bikki & Sara Live” alongside Sarah Schaefer, which was premiered on January 29, on MTV.

However, after running the show for two seasons it was canceled on November 22, 2013. Nikki also appeared on several shows including “Money From Strangers”, “Awkward”, “Philosophy”, You’re Welcome” and “After Show”. On June 2, 2015, she joined Comedy Central and hosted the show called “Not Safe with Nikki Glaser”.

The show is a sex-themed talk show and was debuted on 9th February 2016. Moving on to her roles in films, she was given a small role in the movie “punching the clown”, a film by Henry Philips.

She also played herself in “I Am Comic”, a documentary of Jordan bardy. In 2015, she appeared in “trainwreck”, a film directed by Judd Apatow. Coming this far, let’s talk about her private life and how she decided to become a comedian. Let us flashback a little bit, back to her college.

Many of her friends used to convince her to do stand-up, so one day she decided to give it a shot, she wrote some jokes and performed in the college talent show. She was praised by her colleagues, and that made her think it was something special. Glaser then asks her father to let her do the stand-up full time and drop from college.

Her father knew her interest and talent, suggests a comedy club in their locality of St. Louise. As soon as she got permission from her family she signs up to take a comedy class and started doing open mics. Ever since she became famous and that opened a lot of opportunities in her life.

Nikki Glaser: Salary and Net Worth

Nikki Glaser has approximately $2 million and enjoys a lucrative amount of salary.

As we know, Nikki likes her personal life to be personal so she never had such kinds of rumors and controversy.

Nikki has a perfectly average height of about 5 feet and 9 inches and weighs 55 kg. She has blonde hair and blue eyes. Her dress size, shoe size, etc. are unknown.