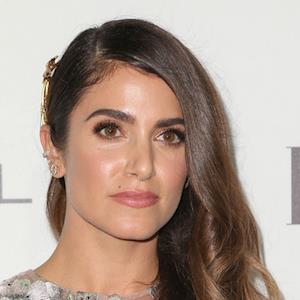 Some of the greatest moments in life come from moments that are incomplete.

To read what the general public thinks and to put it together with your real life, it's amazing how wrong people can be.

Nikki Reed has been married twice in her life. Her first husband was the American singer-songwriter, Paul McDonald. They got married on 16 October 2011 and divorced in January 2015. After that, she got married for the second time with the American actor Ian Somerhalder. The couple got married on 26 April 2015. They have been together for two years now and their relationship is still going very well. On 25 July 2017, the couple welcomed their first child. They had a beautiful baby girl and named her Bodhi Soleil Reed Somerhalder.

Before her marriage, she has been in relationships with Victor Rasuk, DJ Qualls, and Paris Kasidokostas Latsis.

Who is Nikki Reed?

Nikki Reed is an American actress, screenwriter, singer-songwriter, and model. She is best known to the general public for her portrayal of vampire Rosalie Hale in The Twilight Saga (2008–2012). She is also popular for her role as Betsy Ross in the TV series Sleepy Hollow (2015-2016).

Nikki Reed was born Nicole Houston Reed on 17 May 1988, in West Los Angeles, California, USA. Her nationality is American and she is of Jewish ethnicity.

She is the daughter of Cheryl Houston, a beautician, and Seth Reed, a production designer. She has an older brother named Nathan August Reed and a younger half-brother Joey Reed. When she was 14, she moved out of her mother’s house and began living on her own in apartments in the Los Angeles area.

She attended Alexander Hamilton High School in Los Angeles but dropped out after a year. Later, she earned a high school diploma through homeschooling.

Nikki began her acting career playing the role of Evie Zamora in the 2003 film Thirteen. She was also the co-writer of the film. Her first TV role was as Sadie Campbell in The O.C. (2006). Since then, she has appeared in numerous movies and TV films in her career.

Nikki Reed: Salary and Net Worth

He has a net worth of $16 million but her salary is not revealed yet.

Her semi-autobiographical film, Thirteen created controversy because of its portrayal of sexual promiscuity and drug abuse with underage kids. Currently, there are no desperate rumors regarding her personal and professional life. It seems she is doing her best job without harming others and has been a straight person in her life, for which she has not been in any controversy yet.

Nikki Reed has a height of 5 feet 4 inches. Her body weighs 53kg. Furthermore, she has Dark Brown hair and Hazel eyes. Besides these, her body figure measures the size of 34-23-33 inches. Her bra size is 32B, dress size is 4 US and shoe size is 7 US.

Pregnant Nikki Reed Gives Birth to a child With her husband, Ian Somerhalder: She is a bay girl!!