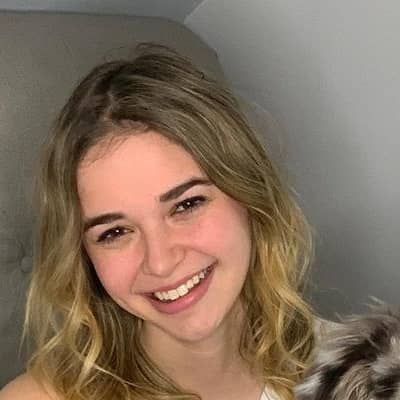 Nikki Roumel currently appears to be single. She hasn’t yet introduced anyone as her boyfriend or lover. Currently, she is more focused on her career than being in a relationship. In further days if she revealed anything about her love life then we will update it.

Nikki Roumel is a Canadian television actress. She rose to fame for her excellent acting performance in Designated Survivor and Holly Hobbie. Presently, she is starring in Netflix’s teen series “Ginny & Georgia”.

Nikki was born in Toronto, Canada on May 8, 2000. The actress is of Canadian citizen and belongs to Caucasian ethnicity. She was a native of the Netherland later her grandfather moved to Canada.

She has an older sister named Talia Roumeliotis who is currently studying nursing. Further, she has not yet disclosed her parent’s identity in the media.

Also, her academics background is under the curtain at the moment.

Nikki stepped into the acting field in the year 2013. Firstly, she used to act in various theatre plays later she made her on-screen debut through the 2013 short film, Anaphylaction as Kendra

In 2015, she made an appearance in a horror film, Creature Lake where she was cast in the character of Little Native Indian Girl. That year, she also made her television debut through some episodes of Paranormal Witness.

Afterward, she was cast in the 2017 television show, ‘Designated Survivor’ where she portrayed the role of Sibyl ‘Sadik’. A year later, she appeared as Cheer Captian in ‘Holly Hobbie‘ alongside Evan Buliung, Erin Karpluk, Kate Moyer, Sara Botsford, and more.

Currently, she is starring in another Netflix series, ‘Ginny & Georgis’ as Young Georgia Miller along with Katie Douglas, Sara Waisglass, Brianne Howey, Mason Temple, Antonia Gentry, and other cast members. The series premiered on February 24, 2021, on Netflix.

Nikki won the Joey Awards on November 12, 2018, for her excellent performances.

To date, Nikki has not been part of any sorts of rumors and scandals that create headlines in the media. Also, she stays miles away from such controversial acts and disputes that could hamper her uprising career and personal life.

Roumel is one of the most promising actresses in the television industry who might have earned a handsome amount of wealth throughout her acting career. But she hasn’t yet revealed her actual figure of net worth, salary, and yearly income in the media.

The actress is 5 feet 4 inches tall and her weight is around 55 kg. She has a fair complexion. Further, she has beautiful dark brown pair of eyes with blonde hair color. Her chest, waist, and hips sizes are 33, 24, and 34 inches. She wears 6 (US) shoe sizes.