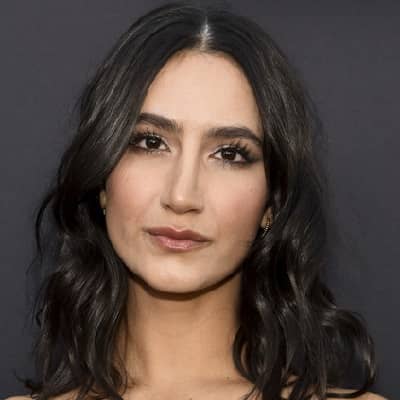 Nikohl Boosheri is officially in a relationship with Wild the Coyote. Cayote is a musical artist.

Since 2015, she has been uploading pictures of a boyfriend on social media. She does not fail to wish him birthday and posted different photos together traveling and spending their time.

In the year 2017, Nikohl posted a photo with Cayote captioning him as her Partner in Crime.

The couple was reported living together in Los Angeles, but they are still unmarried.

Nikohl Boosheri is a Canadian actress who is best known for playing the role of a Muslim lesbian Adena El-Amin in the series, The Bold Type.

Likely, Nikohl Boosheri is also known for her work in the movie The Persian Connection and also appeared in the recurring roles in Rogue and Altered Carbon.

Nikohl Boosheri was born on September 3, 1988. She was born in Pakistan to Iranian parents whose names are unknown.

The young Nikohl spent her childhood mostly in Ontario then the family transferred to Vancouver, Canada where she studied and learned acting.

Nikohl is of American nationality and belongs to mixed (Iranian-Pakistani-Asian) ethnicity. She can fluently speak Persian.

Talking about her education, she went to Simon Fraser University and graduated from there.

Nikohl Boosheri started her career in Hollywood by appearing in a series, Tower Prep in 2010. After a year, she starred in the Sundance Film Festival Audience Award Winner, “Circumstance” 2011. Eventually, the actress earned Best Performance at three other Film Festivals: LA Outfest, International Rome Film Festival, and the Noor Film Festival.

The movie ‘Circumstance‘ was her big break. The movie’s shooting was in Lebanon. It was her first time stepping into Asia, and she admits in an interview with The Source, that she was culture-shocked. It was on the continent where everyone physically looks like her, and she felt belonged working in this field.

She made her career in TV series after performing in series like Continuum, Futurestates, Rouge, and Seeds of Yesterday. Furthermore, she stared in Inner Fear, Supergirl, The Bold Type, and Altered Carbon.

She gains much love and fame after playing a Muslim lesbian artist in The Bold Type. As per media, she has auditioned for  Sutton, an aspiring fashion stylist but was called by the producer after a few days for playing Adena El-Amin.

Further, in her performance in Farah Goes Bang, she was also recognized as one of the 10 Actors to watch for by IndieWires.

Moreover, in 2016, she appeared as Sara in the movie, The Persian Connection. Nikohl is also a songwriter and is frequently seen coordinating their work with her boyfriend, Wild the Coyote.

Playing the role of a Muslim lesbian twice on the screen, Nikohl faced various controversies in this conventional society.

Nikohl Boosheri has an average height of 5 feet 6 in (167cm). Her body weight is 53kg (116lbs). Likely, she has natural black colored hair and dark brown colored eyes.