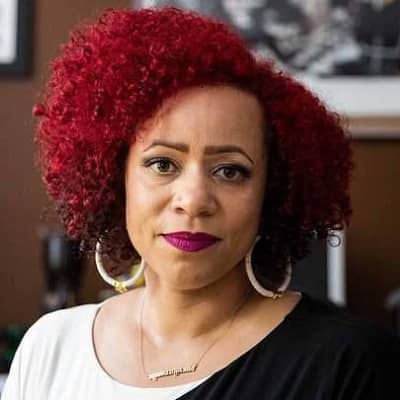 Nikole is married to her longtime boyfriend Faraji Hannah-Jones.

The details about how they met and their dating history are not available. The couple walked down the marriage aisle in mid-2009. Its exact information is also not revealed.

They are blessed with one daughter, Najya Hammah-Jones born in 2011. The family resides together in the  Bedford–Stuyvesant.

In th year 2013, Nikole mentioned that she has struggle to find the best school in a segregated city for her daughter.

Who is Nikole Hannah Jones?

Nikole Hannah Jones is an award-winning American investigative journalist who is best known for the coverage of civil rights in the United States.

Additionally, she is the staff writer for The New York Times.

Nikole was born on April 9, 1976, in Waterloo, Iowa. Her full name is Nikole Sheri Hannah-Jones.

Nikole grew up with her two sisters. Her father’s name is  Milton Hannah, who is African-American.  Likely her mother, Cheryl A. Novotny is of Czech and English descent.

Nikole attended Waterloo West High School. In addition to it, she used to write various high school newspapers there and completed her schooling in 1994.

Nikole started her journalism career from her high school writing various newspapers. Talking about her professional life, she worked in the various daily newspapers in the Pacific Northwest, The Oregonian in Portland, Ore in her initial stage.

In the same way, she spends three years extensively writing on the issues of race, class, school desegregation, and equality. Likely, she wrote for The Oregonian for six years in 2006. The next year, she wrote about the impact on the community for the National Advisory Commission on Civil Disorders.

Similarly, Nikole received a fellowship from the Institute for Advanced Journalism Studies from 2008 to 2009. In 2011, she was part of the nonprofit news organization ProPublica and covered civil rights and its research.

Since 2015, Nikole has been a staff reporter for The New York Times. Working on it, she has written about various topics from racial segregation, desegregation, and in the same way resegregation to housing discrimination.

Nikole working along with Ron Nixon, Corey Johnson, and Topher Sanders created the Ida B. Wells Society for Investigative Reporting in 2015.

Just in 2019, Nikole launched a project, 1629 project as to re-examine the legacy of slavery in the United States. In fact, she even won a Pulitzer Prize for the project work. Consequently, it has been listed as one of the 10 greatest works of journalism in the decade from 2010 to 2019.

The average salary of a writer for the New York Times is around $80,000 annually.

Like;y, her net worth is said to be around $3 million.

Nikole came into the headlines after receiving various criticism of the 1619 project.

A letter was prepared by the National Association of Scholars signed by twenty-one scholars from around the United States. It had asked for the cancellation of the Pulitzer Prize for her 1619 project.

Nikole has an average height and weight. Similarly, she has a beautiful face with colored eyes.

She naturally seems to have dark brown curly hair and prefers it to dye into burgundy red.

Also, get to know about other journalists like Derek Blasberg, James Bennet, Anne Thompson, and Adam Fleming.