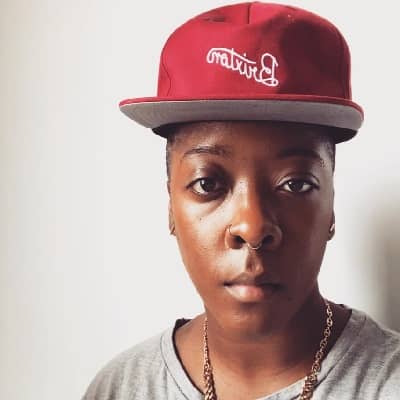 Nina Chanel Abney keeps her low-profile when it comes to her personal life. To date, she hasn’t introduced anyone as her boyfriend or lover.

Abney’s current relationship status is possibly single. In further days, if she revealed anything about her love life then we will update it.

Who is Nina Chanel Abney?

Nina Chanel Abney is renowned as an American contemporary artist. She is best known for her work where she examines race, gender, pop culture, homophobia, and politics in her art.

The artist is also famous for her colorful graphic large-scale paintings where she explores her signature pop-surrealist style.

Nina was born in Harvey, Illinois, the United States on June 4, 1982. She holds an American nationality and is of African-American descent.

Nina raised by her single mother named Karla, her aunt, and her grandparents in Chicago. Her mother was an artist by profession.

She met her biological father for the first time when he pulled her mother over for an alleged traffic violation while they were driving through Indiana.

She has a younger sister from her mother another marriage whose name is unknown at the moment.

In 2004, she received a BFA with a dual major in studio art and computer science from Augustana College in Rock Island, Illinois.

After graduation, she works as an assembly line worker at Ford Motor Company. Later, she quit after her co-worker gets their leg crushed in an accident.

Then, she enrolled at the Chicago Art Institute and the Parsons School of Design where she earned an MFA in 2007.

To date, Nina hasn’t been part of any rumors and disputes that create headlines in the media. Also, she stays miles away from such sorts of controversial acts.

But while she was in high school, Nina and her sister were the only black children in their class at school where they were get teased by other students.

Nina might have earned a handsome amount of fortune through her successful career as an artist. But she hasn’t yet revealed her current net worth, salary, and yearly income to the public.

Abney has a black pair of eyes and black hair as well. From her appearance, she seems tall in her stature but her exact height, weight, and other physics are still under the curtain at the moment.

It seems that she loves boy-cut hairstyles and she often wears a hat or cap.