Previously, she had an affair with a screenwriter-director Grant Mellon in starting 2019. However, the couple split after a year of dating in November 2019.

In December 2016, she dated Glen Powell but in November 2017 the news of their separation were all over the media. 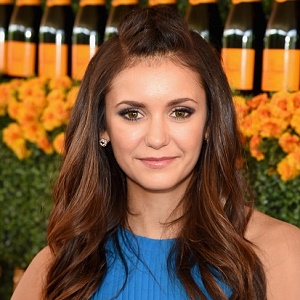 Sometimes, the only way to discover who we are, is by figuring out who we are not.

I don't like any kind of negativity. I try to be good to everyone, whether it's a love, a friend, an ex. I'll always try to treat people the way I want to be treated.

Even though you're growing up, you should never stop having fun.

Who is Nina Dobrev?

Nina Dobrev is a Bulgarian-Canadian actress who is immensely popular for her work as an actress in the drama series ‘Degrassi: The Next Generation in which she played the role of Mia Jones along with her role as Elena Gilbert and Katherine Pierce on the CW’s supernatural drama series ‘The Vampire Diaries’.

Nina was born in Sofia, Bulgaria on 9 January 1989. As of 2021, she is 32 years old. Her nationality is (Canadian and Bulgarian) and her ethnicity is Bulgarian.

She was born to Konstantin Dobrev, a computer specialist, Michaela Dobreva, an artist. Nina Dobrev was brought up by her parents along with her brother in Toronto, Ontario because she and her family moved to Canada when she was just 2 years old. Currently, she lives in Los Angeles for the sake of her career.

As a passionate child, she was always active in participating in different cultural events in which she can show her talents to a large number of viewers.

This fostering interest drove her to learn ballet and jazz classes at Vradenburg Junior Public School and J. B. Tyrrell Sr. Public School followed by her admission to Wexford Collegiate School for the Arts in Scarborough and Ryerson University where she majored in biology attending the Arts classes.

When she was determined to be an actress in her future, she took some acting classes at Armstrong Acting Studios in Toronto.

Being a young and talented actress, she did not face a lot of difficulties to gain a platform where she can prove her acting talents. This drove her to work as an actress in many feature films including ‘Fugitive Pieces’, ‘Away from Her’ along with some television series ‘Degrassi: The Next Generation’.

Her working in ‘Degrassi: The Next Generation’ was one of her greatest successes but, she is mainly known for her role as Elena Gilbert in The CW’s supernatural drama series ‘The Vampire Diaries’.

Nina Dobrev: Salary and Net Worth

Currently, she is one of the demanded actresses in the Film Industry and is of net worth $6 million(2017) and $11 million in 2021. Her salary on the TV series, The Vampire Diaries is estimated to be $30k per episode.

After her breakup with Austin Stowell, there were not so many rumors about Nina Dobrev but, recently, in 2017, emerged a rumor that Nina and Powell are dating each other. This is unconfirmed news that has to be verified in the coming future.

There was a huge controversy when she did not sign the seventh season and left her hit show, The Vampire Diaries. She left the show because she got the role in CW’s hit series.

The Vampire Diaries costars Nina Dobrev and Paul Weasley on a ski date in Wyoming!