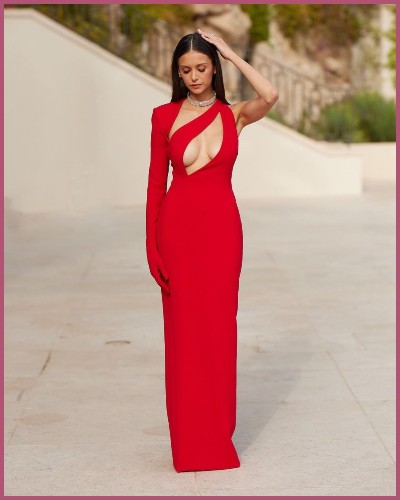 The actress looked stunning in a bold cherry red floor-length gown by Monot. The sultry ensemble has a symmetrical cut-out neckline, one long-sleeve with a built-in glove, while her left arm was bare.

Besides, she was accompanied by her boyfriend Shaun White, who looked dashing in a traditional black suit and bow tie.

Fans eagerly took to social media to comment on Dobrev’s breathtaking red carpet appearance as soon as she walked down the red carpet. According to multiple sources, Dobrev’s latest Cannes red carpet style is her most daring arrival so far.

One of her fans wrote,

Prior to the occasion, the two appeared together in Indio, California for Coachella 2022, when they couldn’t keep their hands off one other. Similarly, they made their red carpet debut at the London premiere of Top Gun: Maverick in May.

A highlight of Nina Dobrev and Shaun White’s relationship

Nina Dobrev is a Bulgarian-Canadian actress who is immensely popular for her work as an actress in the drama series ‘Degrassi: The Next Generation in which she played the role of Mia Jones along with her role as Elena Gilbert and Katherine Pierce on the CW’s supernatural drama series ‘The Vampire Diaries’. See more…

Who is Miracle Watts? More on her Life and Career!
Tags : Actress Degrassi: The Next Generation