Nina Paley is currently single. Her relationship status has not been out in public. She identifies herself as a radical feminist.

Paley is openly childfree: a position she actively encourages others to adopt. And also, she makes ‘quilts’ some of which she has featured on her official blog. 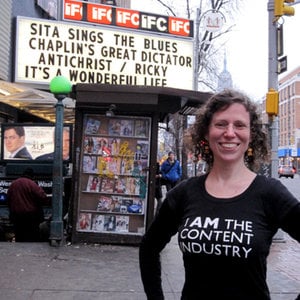 Who is Nina Paley?

She was the artist and often the writer of comic strips Nina’s Adventures and Fluff, but most of her recent work has been in animation.

Her father, Hiram Paley was a mathematics professor and her mother’s name is Jean Paley.

She also attended the University of Illinois, studying art for two years.

Nina Paley’s first animation was made when she was 13, it was recorded on Super-8 reels. Her first animation as an adult was the story Follow your Bliss. Her second clay animation, I Heart My Cat, was shot on a Krasnogorsk Camera.

These two, along with Cancer, were found on VHS with the description “NINA PALEY DEMO REEL 1998”. In 2012, Paley decided to publish them under the Creative Commons Attribution-Share Alike License.

In 2001, she produced Fetch!, a humorous short cartoon feature based on a variety of optical illusions,  which has enjoyed popularity ever since. Beginning in 2002, Paley embarked on her work on the controversial subject of population growth.

The most notable entry she produced on this subject was The Stork, in which the natural environment is bombed to destruction by storks dropping bundled babies. The film is a compact expression of the conflict between the increasing human population and the ecosystem in which it must live.

Early in 2010, Nina started drawing a new three-panel comic strip called Mimi & Eunice. She is distributing it on the web using a copyleft license. In 2013, Paley created an animation on Vimeo depicting the Middle East conflicts over history; it was named a Staff Pick. Between projects, Paley has worked as a freelance director at Duck Studios in Los Angeles.

Her personal crisis caused her to see more deeply into the Ramayana, the Indian epic, which she had encountered in India, and motivated her to produce a short animation that combines an episode from the Ramayana with a torch song recorded by Annette Hanshaw, “Mean To Me”.

Since then Nina had added episodes and other material to her work, which is now called Sita Sings the Blues, thus expanding it into the feature-length treatment of the Ramayana focused on Rama’s wife, Sita, using a variety of animation styles and techniques. Many of the episodes have appeared in recent animation festivals. The finished work premiered at the Berlin Internation Film Festival on February 11, 2008.

Nina plans to publish much of her work, including “Nina’s Adventures”, and all original work in Sita Sings The Blues, Under a copyleft license. The website for Sita Sings the Blues include a wiki where its fans contributed translated subtitles for the DVD of the film. On January 18, 2013, Nina posted on her blog that the copyright license for Sita Sings The Blues was switched from CC-BY-SA to CC-0, thus placing the work into the public domain.

In 2012, Nina was a special guest at the international conference CopyCamp in Warsaw. She won Public Knowledge organization’s IP3 award in 2010 “for her work in intellectual property”.

There has been no information about her Salary as well as about her Net Worth.

Nina Paley is very inactive in public as it comes to her personal life, and till now there have been no rumors as well as controversies over her.

Nina Paley’s body measurements haven’t been public yet, Though, as we can see in her pictures that she looks healthy and young compared to her age. She has brown hair color and hazel eye color.

To know more about Mena Suvari, Melissa Bolona, and Linda Lavin, please click on the link.