Nina Wadia’s relationship status at present is married. She is currently living with her husband Raiomond Mirza and her two children.

They exchanged vows on 04 July 1998 in a traditional Parsi wedding style. She met Mirza in Canada and only after 6 months they tie the knot. Nina on her special day wore a red sari followed by an ivory sari at reception.

Unfortunately, this couple enjoyed their honeymoon after three years of marriage in the Maldives. They have their first kid, a daughter Tia Nina in Nov 2003 and welcomed their son Aidan in Jan 2007.

On the occasion of completing 10 years of conjugal life, Nina and Mirza renewed their vows on Mauritius’s beach in front of their children and friends. 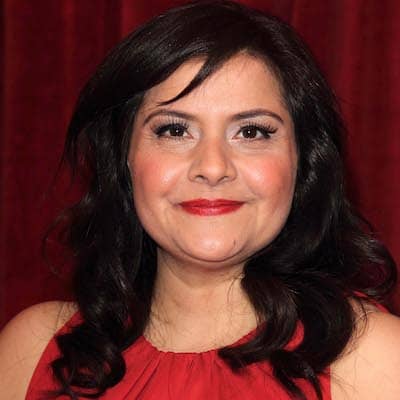 Who is Nina Wadia?

Nina Wadia is a British actress and comedian. Nina Wadia is known for acting in projects like EastEnders (1985), Bend It Like Beckham (2002), Aladdin (2019), and more.

Her movie The Stranger in Our Bed and TV series The Sandman are under the post-production stage. She also does charities and was seen supporting Save the Children.

Nina recently was chosen the Officer of the Order of the British Empire (OBE) for her work in the entertainment industry.

Her birthdate is 18 Dec 1968 and she was born in Bombay, India as Nina Minoo Wadia. The name of her late mother and her late father are kept hidden.

Further, her ancestry is Parsi and a sister plus a brother. They both are older than her. As per her academics, she attended Island College in Hong Kong.

Before this, she studied at Notting Hill and Ealing High School.

Nina Wadia as an actress first appeared in an episode of 2point4 Children (1991) as Sharma. Since then she has done several lead roles in many projects.

Her hit TV appearances are,

Her movie credits are,

Moreover, this actress was seen participating in Strictly Come Dancing S19 with Neil Jones. Unfortunately, this duo was eliminated and became the 1st participant to leave the show. The season was won by Rose Ayling-Ellis and Giovanni Pernice.

By the figures of 2021, she has an estimated net worth of $500 thousand. But her per-year salary is not yet made public.

This Eastenders actress is keeping herself away from scandals as well as rumors. But she has a tragic car crash when she was pregnant for three months only.

Nina Wadia’s height is 5 ft 2 inches and her body weight is average shape. Additionally, she has black hair and has eyes in light brown color.

Nina is not available on social sites such as Facebook. But she is on Instagram and Twitter, where she has over 23k followers and 45k followers respectively.

She is also on TikTok where she has gained over 46k fans.