Previously, she was in a relationship with Ramzan Kutty. She is also rumored to have an affair with Vishal Pandey who is also a TikTok star. 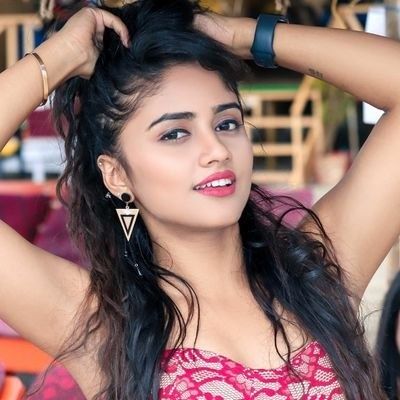 Who is Nisha Guragain?

Nisha Guragain is an Indian social media personality and a TikTok. She is best known for her lip-sync musical video on Mujhe Yaad Hai Aata Teri Wo Nazrein Milana’s song.

This TikToker was born on October 2, 1997, in Mumbai, Maharashtra, India. Her mother‘s name is Yashoda Lamsal Guragain. She has a brother named Niraj, and a sister Rajni Arya.

There is no information about her father. As per academics, Nisha attended Chandigarh Baptist School, Chandigarh. She belongs to South-Asian descent.

Nisha Guragain is a well-known face on social media platforms. She gained attention in a short period of time. This social media personality is a rising Indian TikTok star and an Instagrammer.

She made her music video debut with ‘Rang Lagaya Tune’. Guragain also appeared in a music video Romance Karoon, and a song TikTok.

She shares her fashionable outfits and modeling photos on Instagram. Apart from acting, she has been featured in advertisements, ramp walks, and promotional events.

She made lip-sync, and dance videos on Tiktok. She uploaded lip-sync musical videos on Mujhe Yaad Hai Aata Teri Wo Nazrein Milana’s song which went viral and crossed over 2.5 million likes, from which she gained huge popularity.

The maximum number of likes on her video on TikTok is 46 million. Sometimes, she also makes duet videos with other personalities like Tushar Silawat and Deepak Joshi.

A morphed video of Guragain has gone viral on social media. When she came to know about the video, she immediately came live on her Instagram and clarified that it is a fake video and she is not in the video.