Mostly know him for his movies including ‘The Squid and the Whale’, ‘While We're Young’.

They have a son from this relationship: Rohmer Emmanuel Baumbach. Their divorce was finalized in September 2013. 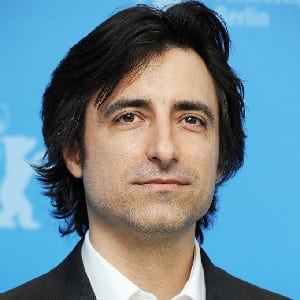 I always viewed life as material for a movie.

I grew up in the heat of 70s postmodern fiction and post-Godard films, and there was this idea that what mattered was the theory or meta in art. My film is emotional rather than meta, and that's my rebellion.

I try not to analyze the characters when I'm writing, but I'm very analytical in my life.

Movie time is like college time. If you had a test on Thursday, Friday felt so far away.

[on While We're Young] I saw this film in a very traditional way, about adults coming apart to come together.

Who is Noah Baumbach?

Noah Baumbach is an American filmmaker. People mostly know him for his movies including ‘The Squid and the Whale’, ‘While We’re Young’, ‘Frances Ha’, ‘Mistress America, and ‘The Meyerowitz Stories’ among others.

He was born to parents Jonathan Baumbach and Georgia Brown. Both his parents are film critics.

Additionally, he has three siblings. Noah was exposed to the world of the show business during his childhood years. He is of American nationality.

Furthermore, he belongs to a mixed ethnic background of Ashkenazi Jewish and English.

Talking about his education, Baumbach attended Brooklyn’s Midwood High School and graduated in 1987. In addition, he received his BA in English from Vassar College.

Baumbach initially worked as a messenger at ‘The New Yorker.’ He made his directing debut at the age of 26 with ‘Kicking and Screaming.’

In 2000, Noah was the writer of ‘Thirty’ and ‘Conrad & Butler Take a Vacation. Since then, he has worked in several other movies and television series. At present, he has more than 15 credits as a writer.

Some other movies and television series that Baumbach has worked on are ‘The Meyerowitz Stories (New and Selected)’, ‘Mistress America’, ‘While We’re Young’, ‘The Corrections’, ‘Frances Ha’, ‘Madagascar 3: Europe’s Most Wanted, ‘Greenberg’, ‘Fantastic Mr. Fox’, ‘Margot at the Wedding’, and ‘The Squid and the Whale.’

Furthermore, Baumbach also appeared as Phillip in ‘The Life Aquatic with Steve Zissou’ and ‘Highball.’  He has also appeared in ‘Mr. Jealousy’ and ‘Kicking and Screaming.’

Baumbach garnered the prestigious Oscar Award nomination in 2006 for ‘The Squid and the Whale’ in the category of Best Writing, Original Screenplay.

Additionally, he has won the Annie Award and Austin Film Critics Award.

In 2005, Noah received a nomination for the Golden Berlin Bear at Berlin International Film Festival. All in all, he has 20 wins and 52 nominations for various awards to date.

Baumbach has not revealed his current salary. However, he has an estimated net worth of around $ 25 million at present.

Baumbach was at the center of the Cannes controversy after his movie ‘The Meyerowitz Stories’ had only a 10-screen week’s run in the U.S. At present, there are no rumors concerning Baumbach and his career.

Talking about his body measurement, Baumbach has a height of 5 feet 9 inches (1.75 m).

Additionally, his hair color and eye color are dark browns.

Baumbach is not active on social media.