Widely famed for portraying the role of Kenny O'Neal in the ABC sitcom The Real O'Neals. He is in a relationship.

Talking about his sexual orientation, Noah Galvin has openly stated he is gay. Galvin confessed his sexuality when he was 14 years old. He lives peacefully and splits his time between Manhattan and Los Angeles, California.

About his relationship status, Noah Galvin is presently dating Ben Platt. Platt is a well-recognized American actor, singer, and songwriter and has been known for The Sound of Music, The Book of Mormon, and Dear Evan Hansen.

The duo started dating in 2017 and has been together since then. Platt was also replaced by Galvin in the title role of Dear Evan Hansen. 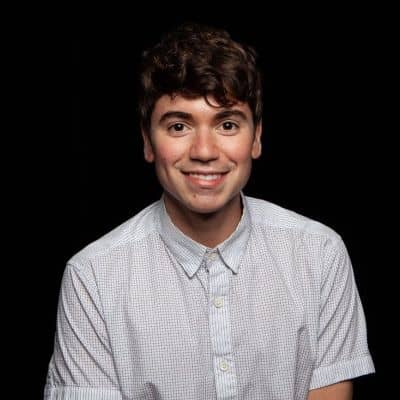 Who is Noah Galvin?

Noah Galvin is a well-recognized American actor and singer. Galvin is widely famed for portraying the role of Kenny O’Neal in the ABC sitcom The Real O’Neals and later performing the role of titular in the Broadway musical Dear Evan Hansen.

Moreover, he is known for his theater such as the Signature, Playwrights of Horizon, MCC, The Vineyard, The Public, The Culture Project, and so on.

Noah Galvin was born on 6 May 1994. At present, his age is 27 years old. Likewise, his birthplace is Katonah, New York, the USA.

Noah is the son of his mother, Abbie Fink whereas his father’s details are unknown. Moreover, he has two siblings named Adrian Galvin and Emma-Adele Galvin.

Talking about his nationality, Galvin holds an American identity whereas his ethnicity is Irish, Italian, Russian Jewish, Polish Jewish.

Regarding education, the star attended John Jay High School and completed his education.

Before Noah was featured in The Real O’Neals, he worked Off-Broadway for companies such as Signature, Playwrights Horizons, MCC, The Vineyard, The Public, The Culture Project, The Flea, The Wild Project, New York Theater Workshop, the Barrow Street Theater, Rattlestick, Ensemble Studio Theater, and so on.

Later, Galvin worked as the replacement for the title role in Dear Evan Hansen after the departure of Ben Platt. He was finally featured on 4 February 2018. Later, the actor also worked on the role of Arthur in What If it’s Us, a novel by Adam Silvera and Becky Albertalli.

Freshly, he joined the cast of the television series, The Good Doctor in the recurring role of Dr. Asher Wolke.

A famed actor, Galvin has earned handsome money from his profession. He has been active in his profession from the year 2006 till the present.

It is reported that Noah Galvin has an estimated net worth of $19 million as of 2022.

Noah has never been part of any controversial matter or rumors till now. The actor has been preoccupied with his professional and private life.

It seems that Galvin prefers enjoying his personal life and does not want to merge it with his professional life.

27 years old star, Noah has handsome looks and an admirable He stands at a height of 5feet 6inches. Also, he has a balanced bodyweight of 70kg.

Furthermore, Galvin has black eyes whereas his hair is brown.

Regarding his social media presence, Noah Galvin is an active personality on social media. Noah has more than 205k followers on his official Instagram account @noahegalvin.

He is also active on Twitter with around 35.6k followers.

Moreover, Galvin is also available on Facebook with nearly 16k fans and supporters.

How is the relationship of Ben Platt and Noah Galvin going?