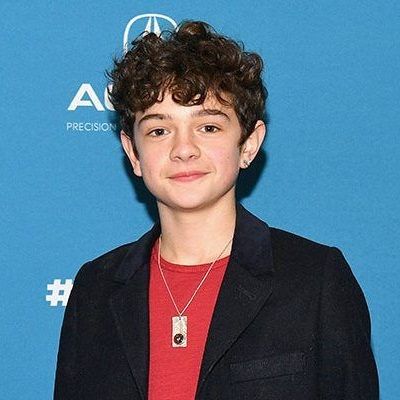 Noah Jupe is currently single. He hasn’t revealed his relationship status yet.

He is very close to his co-star, Millicent Simmonds.

Who is Noah Jupe?

He is also the winner of Hollywood Critics Association Awards for the Best Performance by an Actor under 23 for the movie ‘Honey Boy’ in 2019.

He has also played in several TV series like ‘Downton Abbey’, ‘The Night Manager’, and ‘Houdini and Doyle’.

Noah was born on born 25 February 2005 in London to Chris Jupe and Katy Cavanagh. His real name is Noah Casford Jupe.

His father is a filmmaker and producer and his mother is an actress. He is the eldest of his siblings. He has a younger brother Jacobi and a younger sister Jemma.

Noah is a very successful young actor. He started his career in acting at a very young age of 10.

In 2015 he got his role as Charles Chandler on the British series Penny Dreadful. In 2016, he appeared in the spy thriller series ‘The Night Manager’.

He started his career in films in 2017 where he played the main role as Ata Morevac in the movie ‘The Man with the Iron Heart’.

In the same year, he also made his appearance in three other movies ‘That Good Night’, ‘Suburbicon’ and ‘Wonder’ for which he got nominated for the Young British/Irish Performer of the Year.

In 2018, he played in a science fiction film called ‘The Titan’ as Lucas Janssen. He also appeared in the other two movies ‘A Quiet Place’ and ‘Holmes and Watson’ in the same year. The following year, he got his role in the movies ‘Honey Boy’ and ‘Ford vs Ferrari’.

Currently, there are no rumors or controversies regarding Noah Jupe.

His net worth is $500,000. His earnings are mostly from his acting career.

His height is 5 feet and his weight is 41 kg. He has brown hair with brown eyes.