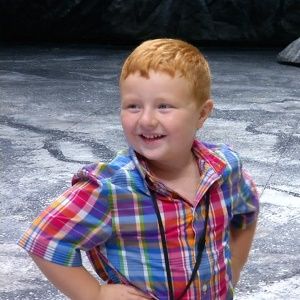 Noah Ritter is still a toddler so it is too early to talk about the relationship. So he does not have an affair with anyone or dating anyone.

Who is Noah Ritter?

Noah Ritter is an adorable kid whose way of talking is loved by the audiences. He was once interviewed and that interview became viral. Now, he is a TV actor, who has been called to the most watched and loved talk show, Ellen DeGeneres Show.

Noah was born on 19th November 2008, in Wilkes-Barre, PA. His mother’s name and father’s name is not available. His ethnicity is North American and nationality is American.

Also, there is no information on which school he attends. Being just nine years old, we can say that he is studying most probably in the primary school.

Noah has become an overnight star after his interview was uploaded on YouTube. His way of talking is so funny that one feels like watching it over and over again. He keeps repeating the word, ‘apparently’ after each line. His first video which was uploaded to YouTube on 4th August 2014, by WNEP-TV, interviewed by the reporter, Sofia Ojeda during an interview at the Wayne County Fair has over 34 million views till date.

Then he was called on Ellen Degeneres Show, for a couple of times. He has also interacted with the renowned Hollywood celebrity, Chris Pratt. Then he was also featured on FreshPet brand’s television commercial.

Noah Ritter: Salary and Net Worth

Noah Ritter’s net worth and salary are not available.

Noah is still a kid. There are no rumors or controversies regarding his life till date.

Noah’s height and the weight keeps changing so his exact height and weight are unknown. His hair color is golden brown and eye color is hazel blue.