Noelle Robinson is a celebrity kid who is best known as the daughter of actor Leon Robinson and reality star Cynthia Bailey. She is possibly single.

Noelle Robinson is presently single. Previously, she has been in a relationship with Howard University alum, Alexis Powell.

In March 2020, she confirmed her relationship with him. After nine-month of togetherness, the couple split which she revealed while playing a game of “Truth or Drink” with three of her friends. 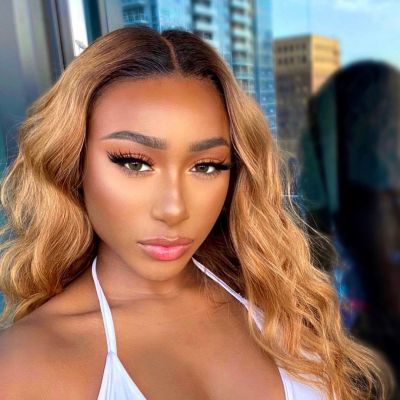 Who is Noelle Robinson?

Noelle Robinson is a celebrity kid who is best known as the daughter of actor Leon Robinson and reality star Cynthia Bailey. She is also popular as an Instagram star.

Noelle was born on the 10th of November 1999, in the United States. According to her birth date, she is 21 years old. Her Sun sign is Scorpio.

She is the only child of Leon Robinson (father) and Cynthia Bailey (mother). However, her parents parted away and Cynthia is currently married to Mike Hill.

Talking about Noelle’s education, she went to Georgia Cyber Academy. Similarly, she was homeschooled for the last two years of high school. For further study, she joined Howard University in Washington, D.C.

Robinson holds an American nationality whereas her ethnicity is All-American.

After dropping out from Howard University, Noelle moved to Los Angeles to pursue her modeling career. She walked at the New York Summer Fashion Explosion.

She is also a social media influencer who has worked with various brands with products including hair extensions and lingerie.

In 2015, her sweet 16 birthday party was aired on WEtv’s CELEBrations and Trevor Jackson and Diggy Simmons have attended the birthday party.

She received a white Jeep Wrangler for her 16th birthday gift. In 2017, she guest-starred in two episodes of the TV series entitled “The Pepper Diaries: Backstage With Sissy Sheridan”.

Robinson has also a self-titled YouTube channel with over 53.8k followers. To date, she has uploaded 14 videos. On March 28, 2021, she uploaded her first video titled, “furnished luxury apartment tour” where she has gained nearly 91k views.

According to other online sources, Noelle has an estimated net worth of around $1.5 million as of 2022. Her salary and other earning are still under review.

In 2019, Noelle revealed that she is sexually fluid in an episode of “The Real Housewives of Atlanta” while Bailey asked about her dating life at Howard University.

Recently, she is rumored of being pregnant when one of the clips of Noelle from her mother’s wedding went viral.

Talking about Noelle’s physical appearance, she has a brown complexion. Likewise, she stands at the height of 5 feet 5 inches tall and her weight is about 56 kg.

Noelle has a brown pair of eyes and dark brown hair color.

Furthermore, she has a self-titled YouTube channel with 53.8k subscribers.

Is Noelle Robinson Pregnant? Find Out Why People Are Convinced That She May Be Expecting!