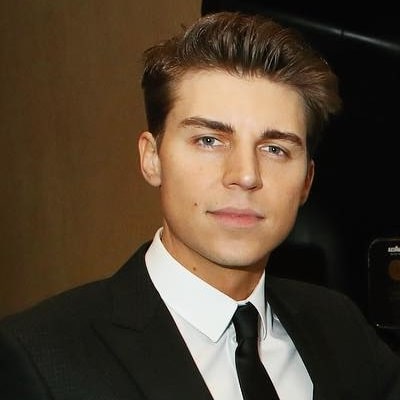 What is the relationship of Nolan Gerard Funk?

Nolan Gerard Funk is currently engaged to Ksenia Solo who is also a well-known actress. However, there is not much information available regarding their love story.

Previously Funk has been in a relationship with Allie Trimm for a year from 2010 to 2011. Also, he has had an encounter with Katie Waissel (2013).

Who is Nolan Gerard Funk?

Nolan Gerard Funk is a Canadian actor, Broadway artist, and singer. He is best known for his role as Hunter Clarington in the musical comedy-drama television series, Glee.

He is starring in ‘You Above All‘ which is in post-production and directed by Edgar Morais and Luke Eberl.

Nolan was born on the 28th of July 1986. The actor hails from Vancouver, British Columbia, Canada. He holds Canadian nationality and is of German descent.

Nolan hasn’t yet disclosed his parent’s detailed information to the media. However, he has an elder named Natanya Funk.

Similarly, his educational background is also under the curtain at the moment.

Before starting his career in the film industry he competed as a national gymnast and diver. In 2001, Nolan made his acting debut and perform his first role as Ryan in the Seven Days episode of The Brink.

Then in the following year, he appeared in the 2002 short film, Moon in the Afternoon where he portrayed the role of Alexander.

He made his acting career big break when he was cast opposite Tammin Sursok in the starring role of Nikko Alexander in Nickelodeon’s movie Spectacular!.

He has also performed in the revival of the Broadway musical Bye Bye Birdie where he was cast in the title role of Conrad Birdie at Henry Miller’s Theatre.

Lately, he has starred in the 2020 HBO Max television series, The Flight Attendant where he was cast in the main role of Van White.

Some of his other notable film and television series are,

Furthermore, he has appeared in Miranda Cosgrove’s music video, Stay My Baby. He had his first live concert performance at a Hard Rock Cafe in New York City on January 12, 2009.

What is the net worth of Nolan Gerard Funk?

Nolan might have earned a fair amount of fortune throughout his successful profession.

However, he hasn’t yet revealed his exact amount of net worth, salary, and yearly income to the media.

What are the body measurements of Nolan Gerard Funk?

The actor has an impressive height of 6 feet whereas his weight is around 74 kg.

He has dark brown hair color with green pair of eyes.

Likely, he has amassed nearly 505.5k followers with over 493.2k likes. He is also active on Twitter with more than 113.4k followers.