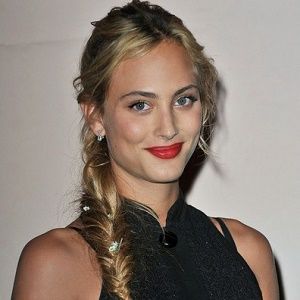 I'm very proud of 'The Words' and all the cast. I think Lee Sternthal and Brian Klugman are like new directors, and I really believe in them, and they're gonna rock everything

When I was 14 years old, I was with my parents at a restaurant. Some people came in and said, 'Would you like to be a model?' I went to see them, and they said, 'You have to lose seven kilos.' I said, 'No, I want to eat French fries.

Nora Arnezeder is single. Even if she is in a relationship, there is no information about it. Previously, she has had affair with Christophe Barratier and Gad Elmaleh.

Who is Nora Arnezeder?

Nora Arnezeder is a French actress, singer, and writer. She has starred in the movies like Les deuxmondes, Louis la Chance, The Words, Inside Me, etc. She has been one of the top 3 most influential French actresses in Vanity Fair.

Nora was born on 8th May 1989, in Paris, France. Her mother’s name is Piera Arnezeder and father’s name: Wolfgang Arnezeder. Her ethnicity is Europian and nationality is French. She has a sister is Léa Arnezeder and she does not have any brother.

There is no information on which school or college she attended.

Nora Arnezeder’s first movie was Paris 36 in the year 2008 and was awarded Lumières Award and Étoile d’Or award. She was the face of Guerlain’s fragrance’s L’Idylle in the year 2009. She has been featured in the movies like Safe House, opposite Ryan Reynolds and Denzel Washington in 2012. She has been starred in The Words, with Bradley Cooper and Ben Barnes.

She has also been part of a horror movie, Maniac. The 29-year-old actress, Nora was featured in the CBS series Zoo. She has won two Golden Globes for her television series, Mozart in the Jungle.

Nora Arnezeder: Salary and Net Worth

Aenezeder’s net worth is estimated to be $2 million and her salary is around $235294.

Rumors were that Nora had an affair with Christophe Barratier, a French actor. The couple dated for around a year while they were doing a movie, Paris 36. But in 2009, they separated.