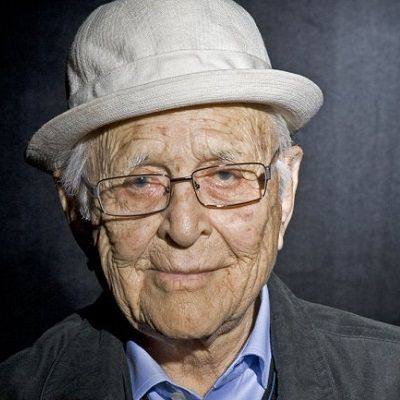 Success is how you collect your minutes.

When something is over, it is over.

Life is made up of small pleasures.

We just may be the most well-informed, yet least self-aware, people in history.

You know, you throw rocks in the lake and scientists will tell you you're raising the level of the lake, but all you get to see is the ripple.

What is the relationship of Norman Lear?

Norman Lear has been married thrice. He married Charlotte Rose in 1943 and in 1947 they divorced. They have a daughter Ellen Lear who was born in 1947. She is a sex therapist.

Thereafter, Lear married Frances Loeb in 1956 and had two daughters Kate Breckir La Pook and Maggie Beth Lear. Their divorce in 1986 cost Lear $112 million to settle the case with Frances.

Who is  Norman Lear?

Norman Lear is an American television writer and producer, political activist. He produced many sitcoms in the 1970s such as All in the Family, Sanford and Son, One Day at a Time, The Jeffersons, Good Times, and Maude.

As a political activist, he founded the People for the American Way in 1981 and supported First Amendment rights and progressive causes.

He won Grammys at the age of 97 and is also one of the oldest people to win Grammy’s.

Lear’s mother Elizabeth Grad Murphy was born in Kherson Gubernia in Ukraine. His younger sibling Claire Lear Brown died in 2015. Lear grew up in a Jewish home and had a Bar Mitzvah ceremony.

His father went to jail for selling fake bonds when he was nine years old.

In 1940, Norman Lear graduated from Weaver High School in Hartford, Connecticut. Then he attended Emerson College in Boston but dropped out in 1942 to join the United States Army Air Force.

Norman Lear started his career after World War II in public relations. On Norman’s first night in Los Angeles, Lear stumbled upon a production of George Bernard Shaw’s Major Barbara at a 90-seat theater in the round Circle Theatre off Sunset Boulevard.

Norman became the producer of NBC’s The Martha Raye Show after Nat Hiken left as the series director. CBS picked up the show, known as All in the Family. Which got premiered on January 12, 1971. And it grew from 1971 to 72 seasons, becoming the top-rated show on TV for five years.

Norman Lear found the organization People for the American Way for the purpose of counteracting the Christian rights organization Moral Majority in 1980. Lear produced an ABC television special titled I Love Liberty in March 1982.

His Act III Communications formed a joint venture with Columbia Pictures Television called Act III Television to produce a television series instead of managing on February 2, 1989. He got spotlighted in the 2016 documentary Norman Lear: Just Another Version of You.

Lear helped as executive producer for One Day at a Time, the reboot of his 1975 to 1984 show of the same name that premiered on Netflix starring Justina Machado and Rita Moreno as a Cuban-American family in 2017.

Later, Lear hosted a podcast, All of the Above with Norman Lear, on May 1, 2017. Which got announced that Lear had teamed with Lin-Manuel Miranda to make an American Masters documentary about Moreno’s life, tentatively titled Rita Moreno: The Girl Who Went For It on July 29, 2019.

Lear got nominated for an Academy Award for composing Divorce American Style in 1967. Lear was among the initial seven TV pioneers enlisted into the Television Academy Hall of Fame in 1984.

He got four Emmy Awards two out in 1971, and one each in 1972 and 1973. Similarly, two Peabody Awards. Also, Norman got the Humanist Arts Award from the American Humanist Association in 1977. Also, his star on the Hollywood Walk of Fame is situated at 6615 Hollywood Boulevard.

President Bill Clinton granted the National Medal of Arts to Lear, noticing in 1999. Also in 1999, Lear and Bud Yorkin got the Women in Film Lucy Award. Lear got awarded the fourth yearly Woody Guthrie Prize exhibited by the Woody Guthrie Center in Tulsa, Okla on May 12, 2017.

Norman got honored as The New Jewish Home’s Eight over Eighty Gala 2017 honoree. Also, Lear is now the oldest man in history to achieve an Emmy Award at the age of 97.

In 1981, Lear established People For the American Way (PFAW), a progressive support association. PFAW ran a few promoting efforts restricting the addition of religion in politics. Lear has some time been a vocal pundit of the thoughts held by the Conservatives and Christians and has pushed for the progression of secularism.

When the issue of Christian Century, Lear associate Martin E. Marty, a Lutheran professor who taught church history at the University of Chicago Divinity School between 1963 and 1998, rejected the allegations and began that the television producer had shown the moral values of various religions and had praised his interpretation of Christianity.

Lear established the Business Enterprise Trust, an instructive program that utilized yearly grants, and business college contextual investigations in 1989. Also, recordings to highlight excellent social developments in American business until it finished in 1998.

In 2000, he gave a presentation to a multidisciplinary research and open approach focus that investigated the assembly of excitement, trade, and society at the Annenberg School for Communication and Journalism. It was after some time named the Norman Lear Center in acknowledgment.

Norman has a net worth of $200 million as of 2022. Similarly, his source of income is from producing and filmmaking different movies and TV series.

His property 14,000-square-foot house is perched on a headland that includes over eight acres of land. It is estimated to be over $39.95 million.

Similarly, the property contains a three-bedroom guesthouse that isn’t included. Also, it has a hilltop compound.

Norman Lear has a height of 5 feet 9 inches and has a decent weight. He has blue eyes with a salt and pepper hair color.

You may also want to read about Deidre Hall, Melissa Sue Anderson, and Michelle Pfeiffer.

Norman Lear, 97, the American writer and producer has won an Emmy! He became the oldest person to acquire this achievement!

Lifeguard Norman Inferrera died tragically in a boat-accident at a young age of 16!