(singer, a dancer, an actress) 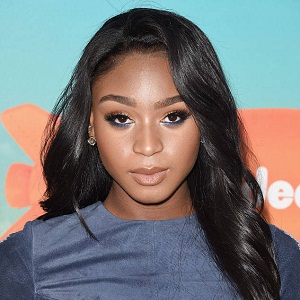 It's important to stand up to all forms of bullying, and it's even more important for those who are around you to be just as courageous and stand with you

Honestly, you cannot go wrong with being yourself.

Though past relationships related to Normani Kordei is not made public, through some resources it is rumored that she is dating an American singer Arin Ray with whom she met in the reality TV competition, The X Factor.

They are together since the year of 2012. Other relationships of Normani is not known to us by any sources as she has kept her most of the personal relations secret and not talked much in front of the media.

Who is Normani Kordei?

Normani Kordei is an extremely talented American singer, a dancer, an actress as well as a composer. She had raised her fame by being the member of a girl group, Fifth Harmony which includes Ally Brooke, Dinah Jane, Lauren Jaurequi and Camilo Cabello. She is an award-winning dancer as well as a singer. As an actress, she is known for Wrestle mania (2016), American Music Awards (2015) and Fifth Harmony (2016).

Normani Kordei was born on May 31, 1996, in Atlanta, Georgia, the U.S. Her ethnicity is African-American and her nationality is American.

She had spent her childhood in New Orleans. Later on, in 2005 her family shifted to Houston, Texas after Hurricane Katrina. She has been dancing and singing since her childhood. She used to improve her pitch of voice when she had nothing to do. Normani had started performing since her age of three. He mother suffered from cancer when she was six.

She finished her higher education in her New Orleans.

Before coming to fame, she was involved in HBO television series Treme and reached the final of the Miss Texas competition before competing on the X Factor. Fifth Harmony was formed in 2012 and they released their debut studio album Reflection in 2015.

She recorded her first single and from this record, she started her singing career. The Fifth Harmony was placed third in the American television music competition show and they were also offered a recording deal with Syco Music. They worked on their first single Miss Movin’ On 16th of July 2013.

She is also a brilliant actress.  She presented her appearance in an American single-camera romantic comedy series Faking it. Normani with her group “Fifth Harmony” recorded their debut album named “Reflection” which was released on January 30, 2015. She also dances and records her own music side by side.

Normani Kordei: Salary and Net Worth

Normani has the estimated net worth of $ 3 million. There are no details regarding her salary.

There was a rumor about the allegations of feuding with Camila Cabello.This rumor was started in an interview when she was asked to explain all the best qualities of her mate in the group “Fifth Harmony”.

However, she made it clear about the rumor saying that she has equal love and respect towards all her four mates. Being a smart lady having the personality of intelligence, she is able to manage and handle the situations of both personal and professional life; she doesn’t have much rumors and controversies.

Normani Kordei Agrees to Go on a Date With ‘DWTS’ Costar Bonner Bolton: ‘I Said Yes’