Noureen DeWulf is a married woman. She is married to an American professional ice hockey goaltender Ryan Miller.

The duo tied their knot on September 3, 2011, and welcomed a son, Bodhi Ryan Miller. After seven years of relationship, they are still living their quality life and there is no sign of divorce between them.

Previously, Noureen was married to James DeWulf in 2002 but the couple could not hold their relationship and end with divorce in 2010. She adopted her estranged partner’s surname as her stage name. 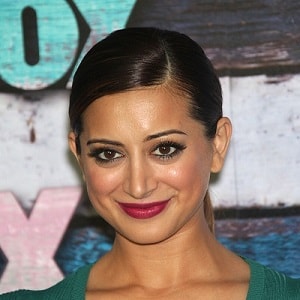 “One of my personal indulgences is getting a weekly massage - it helps to re-align my body. I usually feel so much less tense after I've gotten rid of some knots in my shoulders and back.”

Who is Noureen DeWulf?

Noureen DeWulf is an American actress. She is best known for her performance in films such as ‘West Bank Story’, ‘The Back-up Plan, and ‘Ghosts of Girlfriends Past’.

She was born on February 28, 1984, in New York City, USA. Her birth name is Noureen Ahmed and she is currently 38 years old.

Her parents are Gujarati from Pune, India. She grew up in Stone Mountain, Georgia. Her parents did not encourage her to take drama courses in high school.

She is fluent in Hindi, Gujarati, and Urdu. According to her, Yoga is the most boring exercise. Noureen holds American citizenship and her ethnicity is Marathi Indian.

Talking about her education, she attended Boston University’s College of Fine Arts. Also, she has performed with an Atlanta theatre company during her summer breaks.

After graduation, Noureen DeWulf made her acting debut in a comedy/musical film ‘West Bank Story’ in 2005 in which she portrayed the role of Fatima. Since that, she has been working in comedy films and television series.  Then, she was featured on NBC’s ‘Outsourced’, TNT’s ‘Hawthrone’, Lifetime miniseries Maneater’, etc.

She won the Best Actress award in the category Feature Film for ‘Cofee, Kill Boss’ in 2014 and won Special Jury Prize in the category Best Ensemble Acting-Narrative Feature for ‘The Taqwacores’ in 2010.

She has an estimated net worth of around $3 million as of 2022, and her main source of income is her professional career. However, her salary and income are under review.

Also, her husband, Ryan has an estimated net worth of $14 million.

There was a rumor about her pregnancy but it ended as she gave birth to her son, Bodhi. There are no other rumors heard in her career to date.

Noureen DeWulf has got an hourglass body type with a height of 5 ft. 3 inches and a weight of 52 kg. Also, Noureen has got black hair and black eyes. Her body measurement is 35-25-35 inches.

To know more about Aimee Teegarden, Carly Schroeder, and Dreama Walker, please click on the link.