Novak Djokovic is a Serbian professional Tennis player. Novak Djokovic is married to Jelena Ristić, Jelena gave birth to their first child. They named him Stefan. Their second child, a daughter Tara was born on September 2017.

Novak Djokovic met Jelena Ristic back in 2005, while they were in a high school, and since then, their love has spread throughout these years. The couple got engaged on September 25, 2013, and almost a year after on July 11, 2014, they got married on Sveti Stefan in Montenegro.

Jelena, who is a former model, currently runs her husband’s foundation known as Novak Djokovic’s foundation, which is dedicated to helping all children in Serbia. On April 24, 2014, Novak announced that Jelena is pregnant, and on October 21, 2014, Jelena gave birth to their first child. They named him Stefan. Their second child, a daughter Tara was born on September 2017. 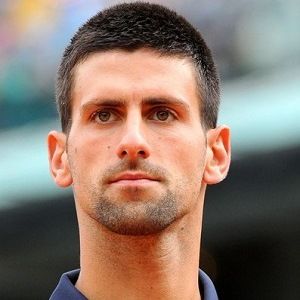 I dedicate this title to my family, my brothers, my girl Jelena, the people that have been with me for so many years, it has been a tough period for our people in Serbia, so this is for my country Serbia, thank you.

I am Serbian, I am proud of being a Serbian, I didn't want to spoil that just because another country had better conditions. A lot of athletes had been misunderstood in Serbia and it is still not easy always to be appreciated. But hope was there.

It's definitely one of the most important achievements and days in my life, in my career. We are all dedicated to this sport 100 percent. When you know you're going to be the best in the world and you're reaching the finals of your favorite tournament, it's something special.

I felt like an animal. I wanted to see how it tastes. It tastes good! It came spontaneously, really. I didn't plan to do it. I didn't know what to do, for my excitement and joy.

Who is Novak Djokovic?

Novak Djokovic is a Serbian professional Tennis player, who is world no 1 in men’s singles tennis by the Association of Tennis Professional (ATP).  Likely, Djokovic has won 15 Grand Slam singles titles, five ATP Finals titles, 33 ATP Tour Masters 1000 titles, 12 ATP Tour 500 titles, and has held the No. 1 spot in the ATP rankings for over 250 weeks.

Novak Djokovic was born in Belgrade, SR Serbia, SFR Yugoslavia on May 22, 1987, and is currently 32 years old. His father’s name is Srđan Djokovic and his mother’s name is Dijana. When he was four years old he got introduced to the game and by the time he was six, during the summer of 1993, he was spotted by a Serbian tennis player and coach Jelena Genčić, in his parent’s fast-food joint at Mount Kopaonik.

Talking about Novak’s education history, there is no information about his educational achievements.

Talking about his profession, during 2003 he turned pro and initially played in ‘ATP Challenger Series’ and ‘Futures’ tournaments and from 2003 to 2005 he bagged three wins in each.

During 2005 he qualified for ‘Australian Open’ marking his first ‘Grand Slam’ tournament but was eliminated in the first round by Marat Safin, the eventual winner of the title.

During 2006 he achieved his first two ‘ATP’ titles by winning ‘Dutch Open’ on the outdoor clay court and ‘Moselle Open’ on indoor hard courts. That year for the first time he reached the top 20 list in rankings.

Likewise, his major achievement came that year with ‘Roger Cup’ where he defeated world’s top three ranked players Andy Roddick (No. 3), Rafael Nadal (No, 2) and Roger Federer (No. 1) in the quarterfinals, semi-finals and final matches respectively. That year he was named best athlete of Serbia by ‘Olympic Committee of Serbia’ and also received the ‘Golden Badge’.

He was part of the Serbian team that won ‘Davis Cup’ defeating France in 2010. He was at his performing best in 2011 winning three of the four ‘Grand Slam’ titles (‘US Open’, ‘Wimbledon’ and ‘Australian Open’) and a total of ten tournaments that saw him capturing 43 matches in a row.

Novak has an estimated net worth of around $200 million and his main source of earning is from his professional career. This talented player also has endorsement deals with Mercedes-Benz, Audemars Piguet, Sergio Tacchini, FitLine and Srbija.

His average annual income is $48.5million and he also has other personal investment in the tone of $152.8 million. But there is no information about his salary.

There was a rumor that, a year ago, in March 2016, Tennis star Novak Djokovic and Deepika Padukone were clicked by the paparazzi outside a restaurant in Los Angeles. Moreover, new reports are claiming that the actress had an affair with ace tennis player Novak Djokovic.

Another rumor, in 2008, Novak was linked with the Olympic javelin thrower, Leryn Franco. Leryn, who is also a model once finished as a runner-up in the contest for Miss Paraguay. Currently, he is far from rumors and controversies.

Novak Djokovic has a height of 6 feet 2 inches. Additionally, he weighs is 78Kg. In addition, Novak’s hair color is dark brown and his eye color is hazel. Furthermore, his shoe size is 10.5 (US).

Also, read the affair, salary, the net worth, controversy, and the bio of Jelena Janković, Kristina Mladenovic, Rod Laver.

Who Is Natalija Scekic? She Allegedly Took $70K To Seduce Novak Djokovic!